US President Joe Biden hopes to dramatically increase the sale of electric vehicles in the US, which account for less than 2% of car sales currently. 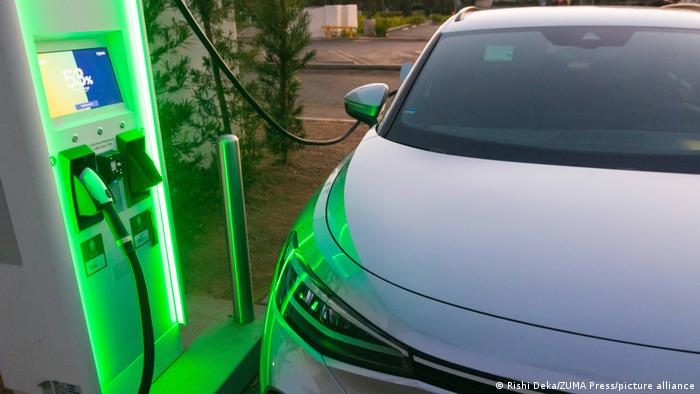 Car emissions are the single biggest US contributor to greenhouse gasses

US President Joe Biden has vowed to make 50% of all vehicles sold in the US "zero-emissions" by 2030, the White House said in a statement on Thursday.

Biden is set to make the policy official through a presidential executive order.

Although Biden's target does not exceed what many American car manufacturers were already considering, it is a major statement for the US, where car emissions are the single biggest US contributor to climate change.

While electric vehicles comprise roughly 10% of European car sales, they account for less than 2% in the US, according to the International Energy Agency in 2020.

"The global market is shifting to electric vehicles and tapping their potential to save families money, lower pollution, and make the air we breathe cleaner. Despite pioneering the technology, the U.S. is behind in the race to manufacture these vehicles and the batteries that go in them," the White House said.

The Biden administration hopes the policy will position "America to drive the electric vehicle future forward, outcompete China, and tackle the climate crisis," the statement added.

Volkswagen is accelerating into e-vehicles

The three main US auto manufacturers, Ford, General Motors, and Stellantis, reacted to Biden's announcement by expressing their "shared aspiration to achieve sales of 40-50%" of electric vehicles by 2030."

"Our recent product, technology, and investment announcements highlight our collective commitment to be leaders in the US transition to electric vehicles," the three firms said in a statement shared by the White House.

Automaker Toyota said in a statement the goal was "great for the environment" and added that the White House could count on the firm "to do our part."

A second life for EV batteries

One of America's largest unions, United Auto Workers (UAW), also backed the White House plan. "The members of the UAW, current and future, are ready to build these electric cars and trucks and the batteries that go in them," President Ray Curry said.

"Our members are America's secret weapon in winning this global race," Curry added.

Biden's electric vehicle plan is a major departure from the dramatic loosening of environmental regulations and climate protections under his predecessor, former President Donald Trump.

Biden's proposed rules are in line with vehicle emissions reductions that the state of California set in a 2019 deal with some automakers, a move the Trump administration had opposed.

US regulators under Biden also plan to revise Trump's March 2020 rollback of fuel economy standards, which had set 1.5% annual increases in efficiency through 2026 — well below the 5% target set by former President Barack Obama in 2012.

European firms will generate millions of new jobs as factories ramp up production of lithium-ion batteries needed for a new generation of electric vehicles, the EU has said.