Under the new proposal, households worth more than $100 million would pay at least 20% tax on their total income. Progressives in Biden's Party have long called for higher taxes on the rich to address inequalty. 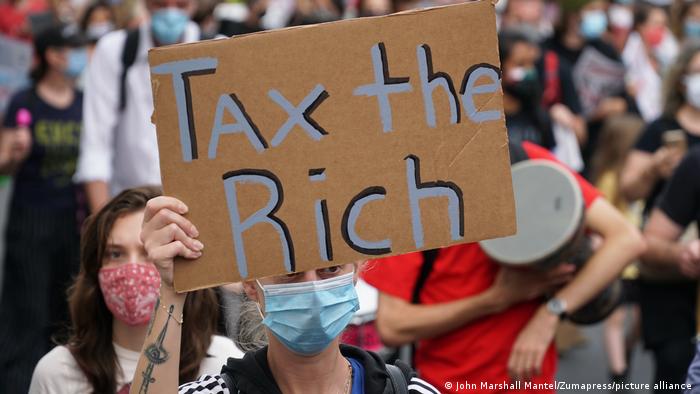 The richest American taxpayers will pay a minimum tax on their income each year in a new budget plan, US President Joe Biden announced on Monday.

"This minimum tax would apply only to the wealthiest 0.01% of households — those with more than $100 million (€91 million) — and over half the revenue would come from billionaires alone," the White House said in a statement.

"It would ensure that, in any given year, they pay at least 20% of their total income in federal income taxes."

The new proposal meets the demands of progressive members in Biden's Democratic Party, who have long called for measures to impose higher taxes on the country's wealthiest to help address inequalty.

Similar plans, which had stalled since due to a cross-party split in Congress, were discussed last year when the president proposed a massive spending bill to reboot domestic social services and fight climate change.

Who would pay more?

Signifying a massive reorientation of the US tax code, the proposal would keep the wealthiest people in the US from paying lower rates than those who think of themselves as middle class.

Notably, a study by the Biden administration this past autumn revealed that 400 billionaire households paid an average of only 8.2% in taxes on their income between 2010 and 2018. This rate is often below that of many regular American households. 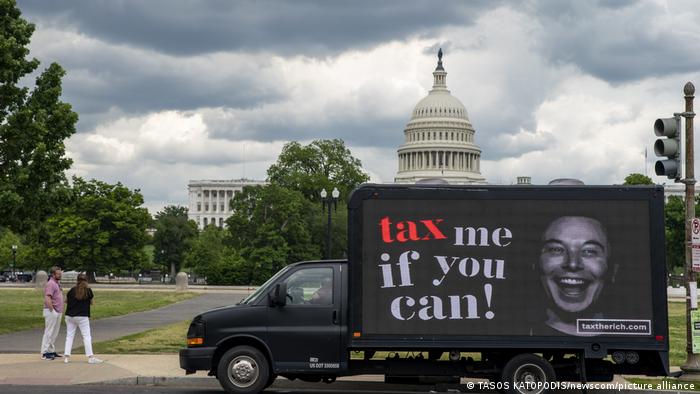 Under the proposal, billionaire Elon Musk would pay an additional $50 billion in taxes

The new proposal will dramatically change the taxes paid by US billionaires. For example, Tesla boss Elon Musk would pay an additional $50 billion in taxes, while Amazon founder Jeff Bezos would pay close to $35 billion more, according to figures deduced by University of California Berkeley economist Gabriel Zucman, cited by The Washington Post in their initial reporting on Sunday.

Where will the money go?

As well as the increased taxes on the rich, which will raise a revenue of $361 billion over 10 years, other new tax rises, expected to mark up $1.4 trillion, include 28% corporate tax and 39% top individual rate.

His administration aims to spend $795 billion on defense, $915 billion on domestic programs, while $48 billion will be spent on increasing supply of affordable housing.

The rest will go to essential spending such as Social Security, health provisions, and net interest on the national debt.

"Budgets are statements of values," Biden said in a statement, "and the budget I am releasing today sends a clear message that we value fiscal responsibility, safety and security at home and around the world, and the investments needed to continue our equitable growth and build a better America."

Higher taxation for billionaires has long been a demand of the political left. But the new measure still requires congressional approval. It could raise up to $360 billion in new revenue over a 10-year period.

The Biden administration inherited a budget deficit that equaled 14.9% of the entire US economy from the former Trump administration. However, the deficit starting in the upcoming budget year will be below 5% of the economy, experts have said.