After 13 long years, the end seems to be in sight. The Berlin Brandenburg Airport, which was supposed to open in 2011, has topped out a second terminal. BER is meant to open next year. 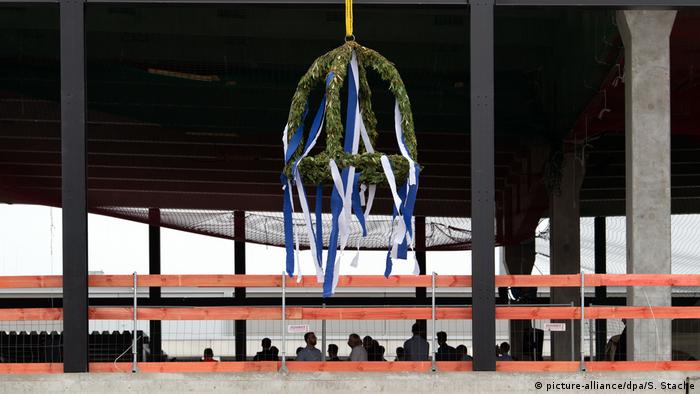 The Berlin Brandenburg Airport (BER) celebrated the topping out of Terminal 2, inching the long-unfinished airport closer to completion.

Construction workers raised a wreath to mark the topping out, which comes 10 months after the start of construction on the building. Airport CEO Engelbert Lütke Daldrup hailed the achievement as a "first important milestone" for the terminal.

The opening of the new airport, about 18 kilometers (11 miles) south of the German capital, has been delayed for years. Construction began in 2006 and it was originally scheduled to open in 2011, but the project has been delayed six times.

"It took us years to put the BER construction disaster in order," Lütke Daldrup said.

In contrast to a "travel cathedral" with wood paneling and natural stone floors in the airport's T1 terminal, T2 is expected to be a simpler design, with concrete and free ceilings. According to the airport, €200 million will be invested in T2, as well as in roads, bus stops and a building for federal police.

VW finds a use for Berlin's unfinished airport

There is good news from Berlin. The new airport is finally open, however only for Volkswagen since they want to park thousands of unsold cars there. At the same time, some employees won't have to work as much. (27.06.2018)

Opinion: Tear down Berlin's unfinished airport and start over!

Why can't Berlin finish big public projects? German engineering has become a cliche and they can seemingly build anything on four wheels, but when it comes to four walls it's a different story, says DW's Timothy Rooks. (01.03.2018)