Berlin's new airport: 'This time it will happen'

Authorities have set an opening date for Berlin's new airport, again. Many such dates have come and gone, but this one might actually stick, politicians say. DW brings you highlights of the Berlin airport saga. 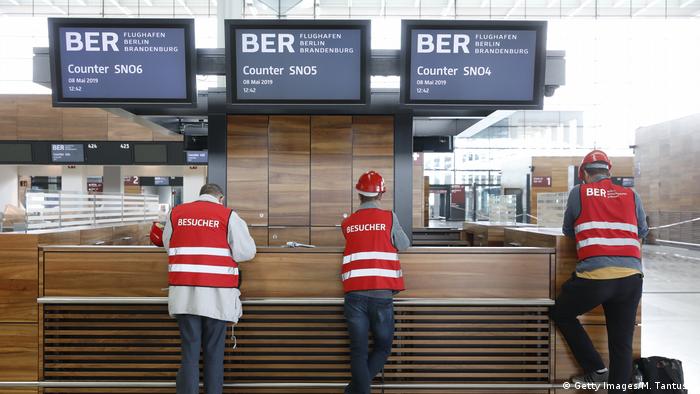 In Germany, the story of Berlin's unfinished airport is mostly seen as something between a running joke and a national embarrassment, with millions in taxpayers' money thrown in every week to keep the troubled project going.

It is currently eight years behind schedule and billions of euros over budget, and the authorities have pushed back the opening date at least nine times. (For a detailed timeline, click here.) This Friday, the airport's director, Engelbert Lütke Daldrup, made a public pledge that the hub would open on October 31, 2020. DW looks into seven key moments of the project's history.

Workers broke ground for the new airport in September 2006. This marked a major victory for the authorities, who had previously clashed with developers and faced protests from residents living near the site in the German state of Brandenburg, which surrounds Berlin. A group of citizens sued against the project, saying that a new airport would make the area too noisy. They were defeated in court.

By 2006, officials had already revised their initial 1995 cost estimate from an equivalent of €1 billion ($1.1 billion in today's US dollars) to double that amount. The budget was then increased once more, to €2.83 billion. Officials slated the opening for October 2011.

In the first of many missed deadlines, the authorities were soon forced to push the opening date back to June 2012. Even so, the organizers scheduled a lavish party ahead of the planned opening, inviting around 40,000 guests. Chancellor Angela Merkel was due to cut the ribbon before the first planes arrived. Then, with just weeks to go, the party was canceled. The management said there "technical difficulties" with fire safety equipment, most notably smoke extractors. A new opening date was set for March 2013, and then for October of the same year.

Faced with various construction fiascos, the management decided to keep the nearly finished airport closed for several more years. By 2015, it was revealed that 600 fire-resistant walls were improperly installed and would need to reinforced or torn down and that ventilators in some of the ceiling panels were far too heavy. Dutch company Imtech, which built the fire protection system, filed for bankruptcy. A senior airport official later admitted to taking €150,000 in bribes from Imtech.

Airport spokesman Daniel Abbou was fired after apparently going off-script in an interview.

Talking to PR Magazine, he said there was a "chance" the airport would open in 2017. However, "no politician, no airport director and no person who is not dependent on medication will give you solid guarantees for this airport."

"Earlier, they would mostly say: No, it's all good. That is bullshit," Abbou said, using the English-language profanity in the German-language interview.

The airport's new chief, Engelbert Lütke Daldrup, told Berlin lawmakers in June of 2017 that the sprinkler system still needed to be fixed and that only about one-half of automatic doors were fully functional. Later in the year, the executive said that the airport could be opened in October 2020 but did not give the exact opening date. To meet this deadline, it might be necessary to host passengers in metal containers until work on the troubled main terminal was completed, according to Daldrup.

Taxpayers were paying about 10 million euros every month to maintain the unused compound, the management said in response to a query from lawmakers. The building needed to be regularly cleaned and aired, and an empty train traveled through the railway station every workday to keep the tunnels free of mold.

Many other parts of airport infrastructure were also kept running.  All 750 monitors showing flight information reached the end of their life expectancy in 2018 and were replaced, without ever being seen by a single passenger. The switch cost half a million euros.

In November 2019, Daldrup gave a new opening date: October 31, 2020. The airport management admits that there is still a lot of work to be done before this date, including a final check from the watchdog body TÜV and live tests involving crowds of some 20,000 volunteers.

The premier of Brandenburg, Dietmar Woidke, said he was optimistic that "this time it would happen."

Even if the airport is opened next year, however, the date would not signal the end of construction work. The number of passengers flying in and out of Berlin has grown significantly since the hub was first designed decades ago, and its capacities are already being expanded.

Istanbul is getting a brand new airport, which Turkey says is the biggest in the world. But what is it up against? DW looks at its rivals around the globe. (29.10.2018)