Protesters across Germany formed socially-distanced human chains in support of the Black Lives Matter movement. They made their stand against racism linked by "ribbons of solidarity."

Thousands of people formed a socially distanced human chain through Berlin on Sunday in a protest against racism, discrimination, and social inequality.

Organizers of the "Indivisible" demonstrate told participants to wear protective face masks and stand apart from each other.

A human chain usually sees participant linking hands or arms, but this time protesters forming the 9 kilometer (5 ½-mile) chain were linked by colored ribbons, forming what organizers called a "ribbon of solidarity"

The line stretched from the iconic Brandenburg Gate and past the landmark Communist-era television tower at Alexanderplatz, down into the ethnically diverse Neukoelln district. 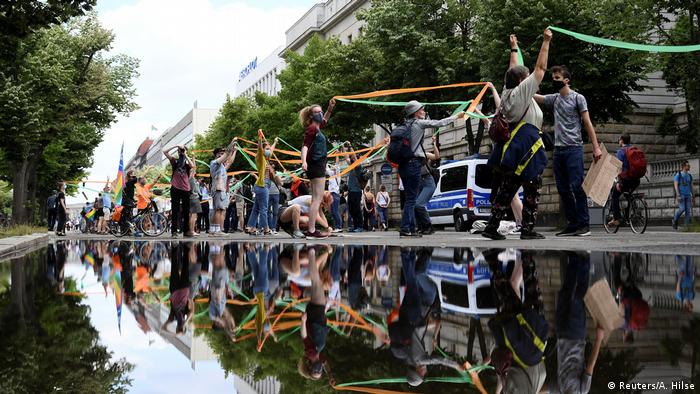 Organizers said they were keen to highlight inequalities in many areas of life.

"The coronavirus is worsening existing inequalities. Many people are threatened with being left behind. We will not allow that," said Unteilbar spokesman Georg Wissmeier in a statement.

Among the groups protesting was "Grannies against the far-right," who gathered at the Brandenburg Gate wearing protective face masks — some in pink knitted hats.

People appeared to keep to the hygiene restrictions during the event, which lasted just over an hour. 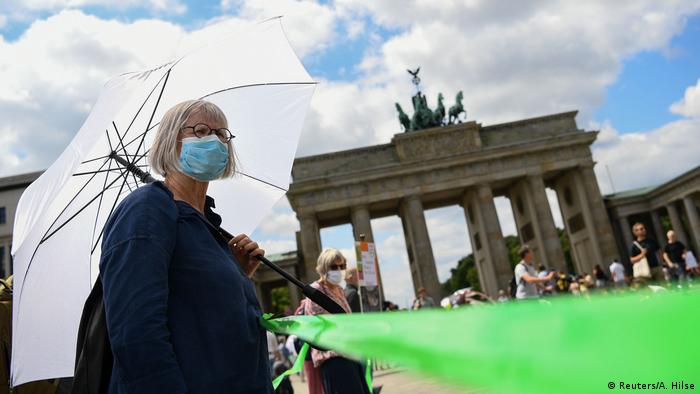 Police put the number of participants at about 5,000, while organizers estimated it at more than 20,000.

Read more: 'Race' has no place in the German constitution — or does it?

Berlin recently lifted coronavirus-related limits on the number of people who can attend demonstrations, though people are still required to keep at least 1.5 meters (5 feet) apart in public.

There were smaller demonstrations in other German cities.

In the northern city of Hamburg, police said 840 people formed a similar human chain using ribbon as the one in Berlin.

There were also anti-racism demonstrations in Leipzig, attended by some 1,400 people, and several other German cities including Freiburg, Chemnitz, Detmold, Plauen, Münster and Passau.

The events followed protests around the world on Saturday, including rallies Paris where police fired tear gas, and London where officers clashed with far-right counter-protesters.

Coronavirus infections are low, and Germans can now demonstrate and will even be able to travel soon. DW's Jens Thurau observes the never-ending transition phase during coronavirus. (11.06.2020)

A police officer in the southern US city of Atlanta has been fired after the killing of a 27-year-old black man attempting to flee arrest. The mayor said she did not believe the use of deadly force was "justified." (14.06.2020)