Just days before the 25th anniversary of the Fall of the Wall, crosses for escapees who died while trying to flee former East Germany have been stolen. Activists say some have been placed on the EU's border with Africa. 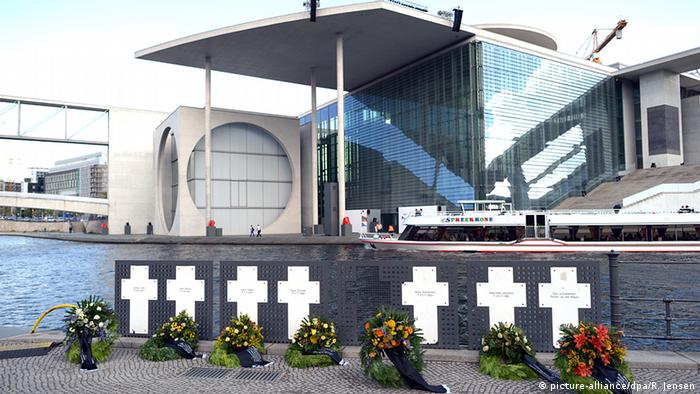 A group of activists campaigning for refugees has removed at least seven white crosses from the Spree riverbank near Germany's federal parliament building, which commemorated those who died in their attempts to cross the former Berlin Wall. It was once tightly guarded by East German troops.

The activists, calling themselves "Zentrum für politische Schönheit" or "Center for political beauty," posted images of the stolen crosses on their website, saying they had been re-erected at the EU's fortified border in northern Africa, where Spain retains its enclave of Melilla, adjacent to Morocco.

The group said the crosses' re-location signified Europe's "new walls." On Twitter, an image showed a group of men with a white cross, said to be refugees in the vicinity of Melilla.

The news agency AFP quoted a group member as saying another set of crosses had been re-erected at another EU border installation: Lesovo in Bulgaria, near its border with Turkey.

"While the whole of Germany is preparing to commemorate the fall of the Berlin Wall 25 years ago, there are new walls around Europe, where at least 30,000 people have capsized," the group wrote on its website on Monday.

On Sunday, November 9, Germany is due to celebrate the 25th anniversary of the historic Fall of the Wall.

The group also posted a video on YouTube, showing how the memorial crosses were removed:

The group is known for its provocative actions: Four years ago, the activists piled up a mountain of over 16,000 shoes in front of Berlin's Brandenburg Gate, in an effort to highlight UN failings in 1995 when Serbian forces massacred more than 8,000 Muslim men and boys at Srebrenica in Bosnia.

Berlin police said they had noticed the crosses were missing at 8.30 a.m. on Monday.

"Officers initiated an investigation into the theft" police said in a statement. "Due to a publication on the Internet, in which the alleged offenders admit responsibility for the action, as well as the obvious political motivation the [Berlin region's] state protection police wing has taken over the investigation."

Last Saturday, the European Union's border agency Frontex launched an operation in the Mediterranean in thwart mass attempts by migrants to cross to Europe by boat on often dangerous sea voyages.

The mission, called Triton, is to focus on border control, only carrying out search-and-rescue operations if necessary. Initially employing five aircraft and seven vessels, it is to patrol a zone stretching just 30 nautical miles off Europe's Meditarranean coast at an estimated cost of 2.9 million euros (3.6 million dollars) a month.

About half of Germans say they know enough about the country's historic division. A survey released days before the 25th anniversary of the fall of the Berlin Wall finds that Germans are more forward-looking these days. (03.11.2014)