One month after a truck plowed into a crowded Berlin Christmas market, a memorial service for the 12 victims has been held in the German capital. Spiritual leaders urged against misusing religion to justify violence. 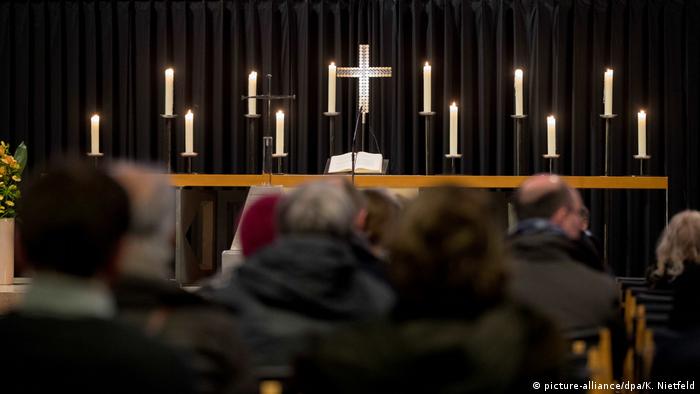 Families of the victims, local Berliners and members of the clergy gathered for the evening memorial service in Berlin on Monday, four weeks after a man drove a truck into the Christmas market.

Twelve candles lined the altar of Berlin's Kaiser Wilhelm Memorial Church, one candle for each victim of the December 19 attack on the Breitscheidplatz Christmas market in Berlin.

The attack injured another 50 people, with 11 still being treated in intensive care.

Some critics of Berlin's local government have questioned whether the city had done enough to memorialize the victims.

Carsten Behrendt, a reporter with German public broadcaster ZDF, posted a picture of the altar and the ecumenical service on Twitter.

Protestant and Catholic clergy opened the ceremony with a prayer for peace, urging against abusing religion to justify violent acts. Church leaders also warned against a further escalation of violence.

Outside the church, a small group of protesters from Berlin's PEGIDA branch gathered to protest against the government's immigration policies, reported Berlin broadcaster rbb. PEGIDA has held what it calls anti-Islamization protests across Germany.

A parallel memorial service was held at a church in nearby Brandenburg. Around 200 people attended the service in remembrance of two of the victims who were from the Brandenburg area.

The evening service also comes as Berlin police and German intelligence services face questions about how they handled the attack and their probe of Tunisian-national Anis Amri, the main suspect accused of driving the truck.

The 24-year-old had been investigated by Germany security authorities for months on suspicion of plotting a possible terror attack. The decision to withdraw close supervision by special forces was partly based on the fact that Amri had not observed Muslim ceremonies in September, which authorities took as an indicator he was not a strict Muslim.

He was shot and killed by police in Milan, Italy, four days after the attack.

A lawyer representing families of some victims of Berlin's Christmas market attack has claimed his clients may sue the government for hundreds of millions of euros. The attack killed 12 people and injured nearly 50 more. (13.01.2017)