Authorities in Berlin have issued arrest warrants for seven suspects after reported sexual assaults during the city's Carnival of Cultures weekend. Eight women reported that they were molested during the event. 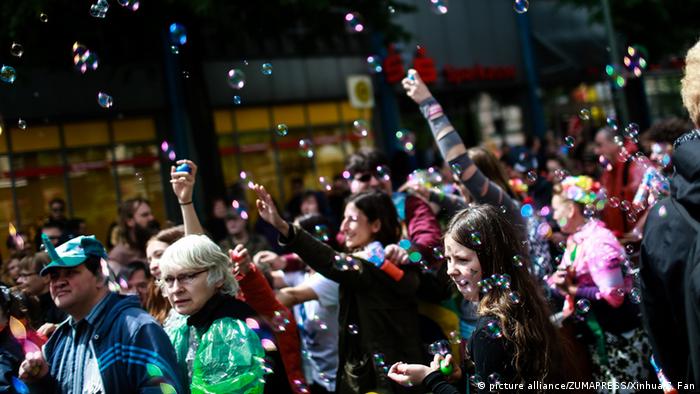 Berlin police spokesman Thomas Neuendorf said on Tuesday that 11 criminal offences had been reported during the bank holiday weekend Carnival of Cultures event.

The victims included eight women who reported that they were sexually assaulted at the street festival, which ran from Friday to Monday.

"The women were touched on the private parts by the perpetrators, or surrounded by a group and touched in that way," said Neuendorf.

The Bundestag has debated a long-awaited reform of Germany's sex crime law, accelerated in the wake of the Cologne attacks. But while women's groups say it's inadequate and overdue, some lawyers think it's unnecessary. (28.04.2016)

Police have detained three suspects after two teens were groped and robbed by a group of young men during Berlin's "Karneval der Kulturen" festival. The assault was reminiscent of the New Year's Eve attacks in Cologne. (15.05.2016)

The spokesman said 12 suspects had been identified, with arrest warrants issued against seven of them. Of those, three were Tunisian, two Moroccan, one Libyan and one Algerian.

Police on Sunday said that two women, aged 17 and 18, reported that they were sexually harassed after being surrounded by a group of about 10 males, with the younger girl having her mobile phone stolen. The pair said they had tried to escape from the group but were repeatedly forced back, until a passer-by intervened.

Three youths between the ages of 14 and 17, who were part of the group and who were already known to police, were temporarily detained.

The stolen phone was retrieved and returned to the victim, but further custody orders against the three were not issued. According to police, two had Turkish citizenship while another was German with "an immigration background." Police stressed that the youths were not recent refugees to Germany, having grown up in Berlin.

Instances of gangs surrounding and robbing their female victims in a similar way have become increasingly common in Berlin, Neuendorf said, with a special investigation group having been set up. An officer had been assigned to each suspect, he said, in the hope of proving some to be serial offenders.

"This degrading and misogynistic approach is as repulsive as it is criminal," Berlin Interior Minister Frank Henkel said on Tuesday, appealing for any other victims to contact police.

Mass assaults against women in Cologne and other German cities on New Year's Eve stoked a debate about Chancellor Angela Merkel's migration and refugee policy, with about 1 million refugees having been registered in the country in 2015. The Cologne assaults were largely blamed on North African migrants.