Berlin: The "Carnival of Cultures"

Every year during Pentecost weekend, Berlin residents and lots of tourists gather in the Kreuzberg district for a celebration of cultural diversity. The festival’s main parade will be held on Sunday, May 15. 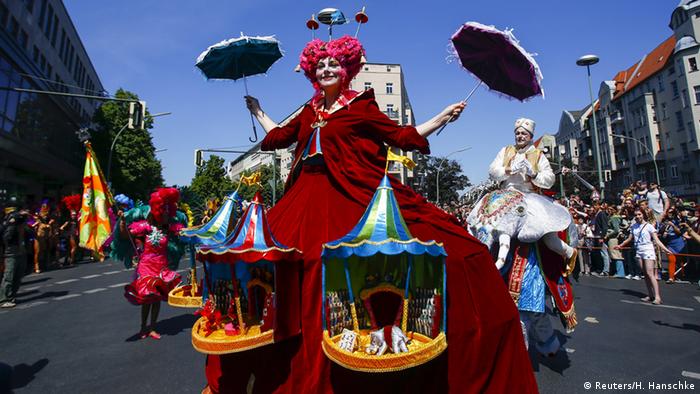 The four-day street festival will take place in and around Kreuzberg’s Blücherplatz. There’ll be concerts on four different stages - plus various other performances and art events.

The highlight of the festival is the big parade. More than 70 different groups will take part, as the marchers make their way from Hermannplatz in the Neukölln district to the Yorkbrücken in nearby Schöneberg. You’ll see samba drummers, stilt-walkers, dancing dragons, flamenco dancers, geishas with traditional fans, and lots of different groups dressed in fantasy costumes.

The Berlin Senator in charge of integration policy, Dilek Kolat, says the Carnival of Cultures highlights the city’s open-minded atmosphere: “This festival sends a clear message to those who would try to provoke fear and hatred that there is no place for them in Berlin.” Kolek adds that the Carnival demonstrates clearly that the people of Berlin are cosmopolitan and tolerant. And all the refugees who are now staying in Berlin have been invited to attend the festival. The organizers say that five groups of people who work with the refugees will be taking part - including “Banda Loca Meets Refugees From Syria.”

Berlin’s population of just under 3.5 million people includes citizens of more than 180 countries. Foreign residents make up about 14-percent of the population.