Police in the German capital have issued an apology after photos emerged of officers disrespecting Berlin's Holocaust memorial. 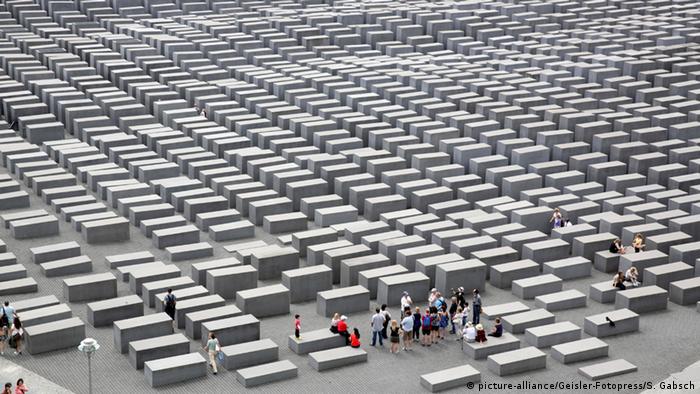 The head of police in Germany's capital condemned a number of officers on Monday after images emerged of them doing push-ups on the blocks that make up the Holocaust memorial.

The Berliner Zeitung newspaper published photos of officers in uniform and carrying weapons using the memorial's concrete blocks as supports for exercise.

"The behavior of the colleagues disregards what this very memorial stands for and does not correspond to the respect that must be shown to it and that is shown to it by the Berlin police," Chief Barbara Slowik said.

"For me, it also violates the memory of those who were murdered," Slowik added.

A place of remembrance

The Memorial to the Murdered Jews of Europe consists of  2,711 grey blocks of different sizes, located in central Berlin, close to the Brandenburg Gate.

Commemoration at the Holocaust Memorial

While tourists often use the site to take selfies, run around, or even for sunbathing and picnicking, the rules forbid running, making noise, smoking and other acts that could be seen as disrespectful for the place of remembrance.

The photos displayed by the Berliner Zeitung appeared to be stills from videos taken by the officers themselves.

The event took place during a protest action in the capital in June for which the police were deployed.

Slowik said she would open an internal investigation into the incident and also stressed that she would highlight the role of the memorial as "a place of remembrance and commemoration."

"The Holocaust memorial is not an adventure playground. This inexplicable action mocks the genocide of millions of people and tramples on the values that our Berlin police," the GdP added.