Despite the pandemic, over 3,500 protesters took to the streets of the German capital to support freedom for LGBT+ people. Activists said they wanted to bring attention to serious human rights threats in many countries. 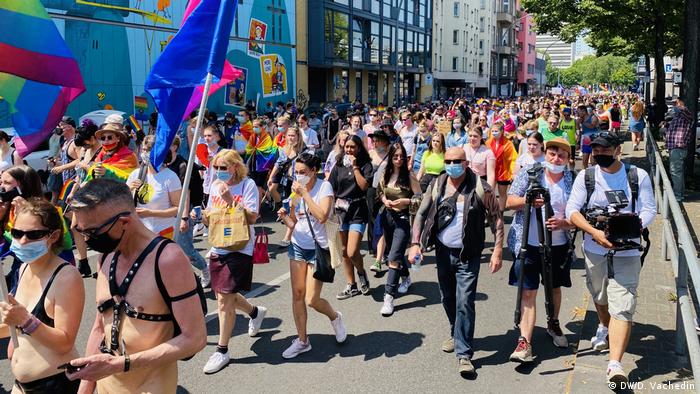 Gay, lesbian, bisexual and transgender (LGBT+) rights activists marched through Berlin in a smaller version of one of the largest pride festivals in the world on Saturday.

The German capital's annual pride parade and festival, known as Christopher Street Day (CSD Berlin), routinely draws more than a million people but was canceled this year due to the ongoing coronavirus pandemic. It was due to take place on July 25.

Berlin police expected more than 1,000 people to attend the demonstration but later estimated that about 3,500 people took part.

Parade organizers called on attendees to maintain a safe distance from one another and wear face masks while on the parade route.

They carried signs and placards with slogans including "No freedom until we are all equal" and "Black trans lives matter" in support of both LGBT+ rights and the Black Lives Matter movement.

Attendees' demands focused primarily on the situation for LGBT people in Poland, Russia and Ukraine.

They also wanted to draw attention to what they called "the dramatic situation of the Berlin scene/community” as many clubs and bars frequented by LGBT persons have been threatened due to the pandemic.

June is considered "Pride Month" by LGBT+ rights activists, with parades and events taking place around the world.

Sunday is the 51st anniversary of the Stonewall riots, which is considered to be the catalyst for increased awareness of LGBT+ rights in the United States.

Berlin has played host to two major protests — one on LBGT+ rights and the other on Black Lives Matter. Police said attendees at both observed coronavirus restrictions well. (27.06.2020)

EuroPride was to happen for the first time in the Balkans in June, a coup for an LBGTQI community facing embedded discrimination. Despite the cancellation due to COVID-19, artists from the region are still coming out. (20.06.2020)

LGBT job protection ruling in US a surprise in many ways

The Supreme Court's LGBT employee protection ruling widened the definition of sex and provides more clarity. It's viewed as a milestone, but the Trump administration's opposition shows there's still a bumpy road ahead. (18.06.2020)

The Russian president wants to codify the notion that marriage is "between a man and a woman." The move is part of his proposals for constitutional changes that critics say are meant to extend his grip on power. (03.03.2020)