The anti-racism rally may not have drawn the huge crowd of three weeks ago, but police praised attendees for keeping to social distancing measures. Protesters gave their personal experiences of racism in Germany.

Racism: How to heal the hurt?

More than a thousand people attended a Black Lives Matter protest in Berlin on Saturday, with participants making efforts to abide by social distancing regulations.

By about 2 p.m. local time (1200 GMT/UTC), police said about 1,100 people had shown up although local reports found many more people turned up later.

The protesters met at the Berlin Victory Column junction, in the city's massive Tiergarten park.

DW's Chaze said protesters were showing solidarity with the Black Lives Matter in the United States following the death of George Floyd, but also to denounce institutional and everyday racism in Germany.

"In the Black German community, there was really a feeling that people in Europe and Germany were not really aware that there is also a racism issue here. That black Germans are confronted with racism nearly on an everyday basis," she said.

"Not necessarily openly racist attacks, but acts of everyday racism such as their CV not being taken because of their picture or their name or people looking at them in the street."

Attendees spoke of their experience of everyday racism in Germany and called for change.

Police told reporters that attendees had behaved in an exemplary manner.

The event was largely unaffected by the attempts of semi-prominent German nationalist and conspiracy theorist, Attila Hildmann, who reportedly drove past the protest in a convoy of about 100 cars adorned with German and US flags.

The vegan chef has in the past made unsavory remarks about Jewish people and the migration crisis as well as claiming the coronavirus is a hoax.

Three weeks ago, some 15,000 people gathered in Berlin for a similar demonstration against racism, while thousands of others rallied in other German and European cities. 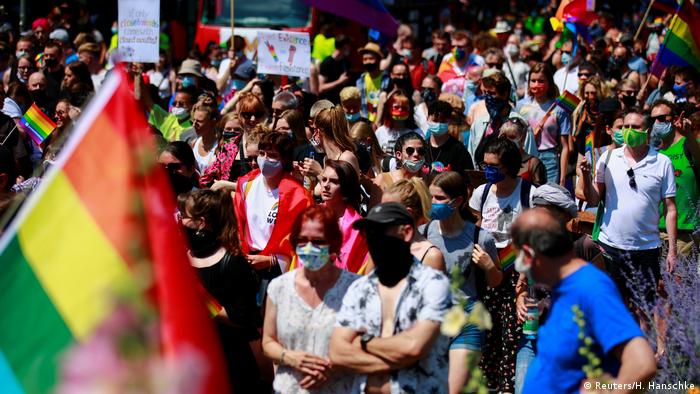 Also on Saturday, Berlin played host to large-scale anti-homophobia protests on Christopher Street Day, after the traditional Pride parade was canceled due to the pandemic.

About 3,500 people marched from Nollendorfplatz to Alexanderplatz to protest against discrimination experienced by those in the LGBT+ communities. Police said they too largely observed coronavirus restrictions.

In Berlin, another 49 people were confirmed positive for the coronavirus, bringing the city's total to 8,144. The all-important reproduction rate remains below 1.

Against the backdrop of social distancing and quarantines, LGBTIQA+ people in Berlin are going online to support marginalized individuals, especially the elderly and the sick. (04.05.2020)

The largest survey of its kind found vast discrepancies between countries — and only gradual progress. Even in high-scoring Germany, more people felt there had been a reduction rather than an increase in tolerance. (14.05.2020)

Racism: How to heal the hurt?