Clubs in the German capital are grooving to the rhythms of Bollywood, India’s flamboyant multi-billion dollar film industry, as a blend of Bhangra and Indipop woven with reggae and hip-hop elements set the beat. 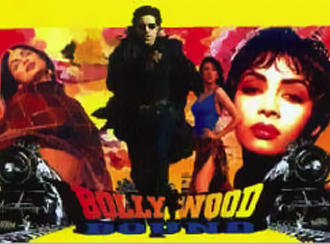 The dance floor at Berlin’s Café Global is empty. It’s still too early for the Bollywood party to take off. The strains of some indistinguishable oriental house music float around the spacious rooms as party-goers stand around, nurse their drinks and watch a choreographed dance sequence from an Indian film unfold on a massive screen.

Suddenly, the music stops and the DJ switches tracks. Soon the unmistakable racing drumbeat of Bhangra or Punjabi pop explodes over the sound system. The room is galvanized as the crowd swings into action, shaking their hips, swaying their hands and bobbing their heads to the infectious beats and raunchy Punjabi lyrics.

The warm weather adds an authentic touch to the frenzied night, as Berlin’s clubbers sweat it out till the early hours in temperatures comparable to Bombay’s sizzling heat – the heartland of the Bollywood wave rolling over Berlin. 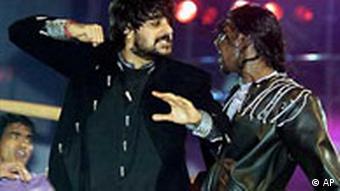 Used to describe a film genre that involves endless extravagantly choreographed dance scenes, kitschy melodrama and heart-wrenchingly emotional songs, Bollywood has now morphed into a club phenomenon. A regular fixture on the club scene in London and Paris, the so-called Bollywood trend, which includes a broad palette of Bhangra or Punjabi pop, Indipop and remixed Hindi film music infused with reggae, hip-hop and techno elements, has arrived in Berlin.

Though only 23, Wekas Gaba has already become somewhat of a dean on the Berlin Bollywood scene. Since last October the young Afghan student of Indian origin has been organizing Bollywood parties in Berlin’s clubs. Originally intended for the Indian community in Berlin, he expanded his two-DJ act, dubbed "Club Deewane," after realizing that "people here were suddenly interested in Indian music and films."

Regularly playing in clubs such as Oxymoron in Berlin’s trendy Mitte district, Gaba’s colorful parties include the screening of Indian films replete with extravagant dance and song numbers and glamorously-clad film stars. Often DJs are flown in from the subcontinent to play the latest Bollywood numbers and Bhangra pop from the Indian charts.

"We wanted to get in a bit of modern Indian lifestyle in our parties, which is basically defined by music, dance, fashion and film," Gaba told Deutsche Welle. "We realized that people here in Europe are all of a sudden discovering Indian fashion and music, which is elegant and stylish."

Getting down, Bollywood style

To ensure that Europeans don't shy away from the dancefloor, a dance studio in Berlin’s Prenzlauer Berg district offers some expert guidance on grooving to Hindi film music.

On a recent Thursday, Elissavet Angu, of Greek-Indian origin, takes six young uncertain Germans through the complicated paces of a dance choreographed to a ditty from the popular Bollywood film "Devdas". Rather self-consciously, the group attempts to coordinate the unfamiliar movements with the fitting facial expressions.

The graceful 30-year-old Angu, who has trained in Indian classical dance, says most of the young people who come to learn Bollywood dance are either intrigued after watching Bollywood films, have just been to India and are enamored of the culture or simply interested because India is suddenly "in."

"It’s important that the people have a good feel for their bodies when it comes to Bollywood dance, because one needs to coordinate hands, legs, the head and eyes at the same time," she explains.

The Indian boom may be sudden in Germany, but hardly anyone would argue that the unexpected European success of the Bhangra pop number, "Mundian To Bach Ke" by British Asian artist Punjabi MC is one of the main reasons why Desi music and particularly Bhangra is filling Germany’s clubs.

"Mundian To Bach Ke" stormed its way to second place on the German charts last December and tenaciously stayed in the top ten for months after. The German success of the song didn’t just popularize Bhangra – originally a folk dance and song performed during the harvest season in the north Indian region of Punjab and in recent decades mixed with reggae rhythms, hip-hop, R&B and Garage influences by the Punjabi Diaspora in Britain – but also helped the 32-year-old Punjabi MC to fame in his native Britain.

What you hear is what you get

The broad Indian music scene has been taken one step further by the Urban Karma Club in the famed SO 36 club in Berlin’s Turkish-dominated Kreuzberg district. There Punjabi Bhangra and Indipop meet with Arabic, African, Chinese and Japanese elements in a monthly lavish multicultural bash amid elaborate far-eastern decorations and shrill projector images on the walls.

But Gaba remains clear that what he offers under his "Bollywood labeling" is really remixes of Indian film music and the current pop version of Bhangra. "We have no illusions of bringing in Indian culture, I wouldn’t know how to do it," he says. The main thing is for people to enjoy themselves.

"I have people coming up to me and saying, `hey this really isn’t my kind of music, but somehow the atmosphere is fantastic,' " Gaba said. "That’s what counts."

Having a "Conscious Party"