Berlin Fashion Week big on bizarre, not on business 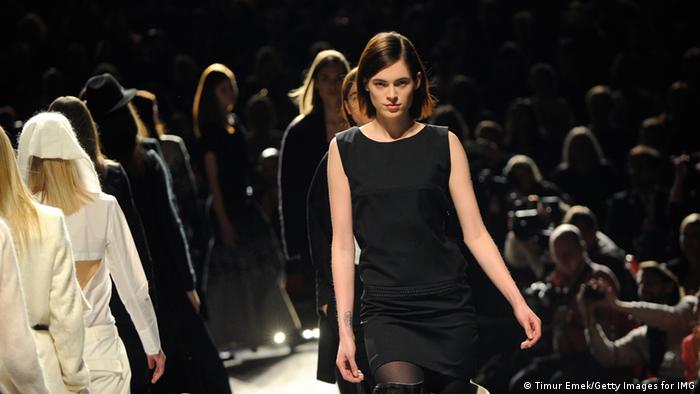 I've made it to the half-way mark of Berlin Fashion Week, and I'm not sure quite what I've seen.

Wait, scratch that. I've seen a giant cat in the front row and popping up at parties - delighting passersby and paparazzi alike. In reality, it's a rather tall woman wearing a white feline head, but I prefer to consider the cat an arch commentary on the increasing presence of celebrities at fashion shows - posing, preening, getting their photos taken, and ultimately distracting from the reason we're all here: the clothes.

Then again, the rumor is that the cat is an agent of trendy fashion magazine Tush, so perhaps it's just a purring marketing stunt.

More importantly, some of our prize-winning pets are also hibernating. Local talents Michael Sontag, Sissi Goetze, Issever Bahri, Don't Shoot the Messengers, Antonia Goy, and Mongrels in Common are all missing in action. Lack of support, lack of money, and lack of interest from retailers seems to be making things tough for the locals.

These small designers simply can't get placed in German stores, and without sales and name recognition, they just can't afford the several-thousand-euro investment required to participate in a fashion show.

Cheers to a decade of tough business

On the High Street side of things, love is in the air. It seems like global chains are opening monthly - and Berlin has three new malls in the works. Two of the hottest events this week were hosted by out-of-towners: Uniqlo's warm-up party, and Topshop/Topman's joint basement bash both had way more more attention and attendees than presentations from some of the city's hometown creatives.

One Berlin designer with nine lives - or 10, really - is Esther Perbandt. On Wednesday night, Perbandt celebrated a decade in the business with an artistic show on the stage of the Volksbühne Theater.

An experimental choir vocalized unearthly tones that were mixed live by a sound artist, while a contemporary dancer writhed expressively. The fashion show itself was fun and raucous, with the audience cheering on the models, many of whom were actors from the theater and artists Perbandt has previously worked with. 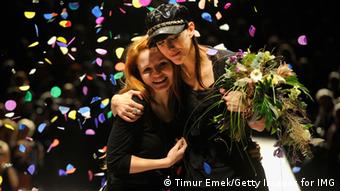 I took a friend with me who is a visitor to this strange fashion landscape. After Perbandt's show, she was pleased and delighted with what she'd seen and commented that she wasn't intimidated by the crowd.

Unlike the snobby spectators found at many of the shows, this audience was artsy and seemed genuinely pleased to be there supporting Perbandt and her work.

What a relief to get a tiny taste of fun while staying focused on fashion. And that's what Berlin Fashion Week should be about - at least some of the time, before we get back to business.

Germany's capital showcases its young talent in Fashion Week. Up-and-coming designers are vigorously promoted, but few can actually make a living off their work. Sustainable fashion could be their next big break. (15.01.2014)