Whenever you think you’ve discovered quite everything about Berlin, the news of another gig, another crazy concept will suddenly pop up out of nowhere, just to prove you wrong. 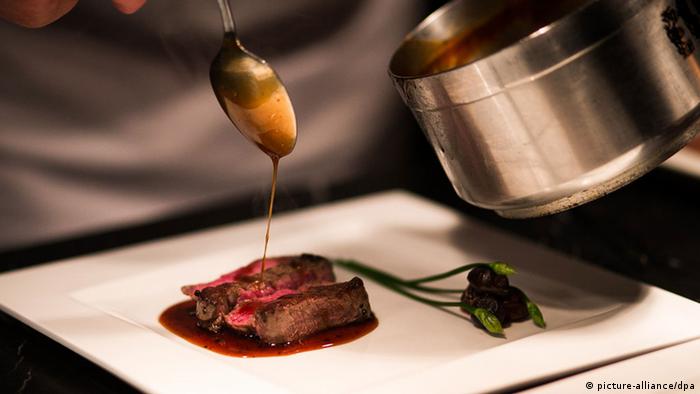 The other day, I learned that a group of young people have been organizing culinary tours through Berlin's neighborhoods since 2008. It's been happening for 5 years already and I didn't know about it! That makes me no less than an ordinary Berliner.

But there's nothing ordinary about Eat the World, a culinary tour of Berlin that takes you right to the heart - and stomach - of the German capital. Just reading about it made me hungry enough to book a tour through the hip and unconventional district of Kreuzberg.

Our tour guide is Leoni, a student who knows quite a lot about Kreuzberg and its tastiest secrets. She admits that she's never had a better job and one can tell that she enjoys every second of it: "The only bad thing about this concept is that it wasn't my idea," she quips.

Around the world in seven restaurants

It was Leoni's boss, Elke Freimuth, who came up with the Eat the World tours after she had lived in Paris, New York and Malaysia for a few years. The idea was to introduce locals and visitors to special parts of Berlin, through their food and their people. Over the past few years, Eat the World has expanded to 10 German cities, including Munich, Hamburg and Cologne.

With a rumbling stomach after meeting Leoni, it's time we got going.

First stop, an Indian restaurant called Cinnamon Tree. The owner, Parveen, greets us personally and invites us to taste his specialty, an exotic soup called Dal, which is served in golden jars. 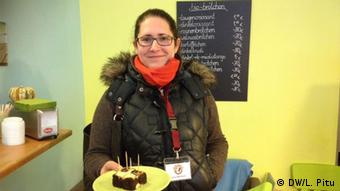 I also order a chai latte, which I pay for separately, since the 30-euro ($41) tour doesn't include drinks. I'm usually reluctant when it comes to Indian cuisine, since I don't like spicy food. But this lentil soup with coconut is just right: tasty and sophisticated, slightly sweet, and perfectly seasoned. We're off to a great start. .

Up next, a Spanish-German restaurant just around the corner, called Zum Goldenen Krümel (literally, At the Golden Crumb). Leoni takes the opportunity to share a few words about the architecture and lifestyle in Kreuzberg, the so-called "Tuscany of Berlin." It may be a Tuscany with no olive or Cyprus trees and without much sun, but a lovely one nonetheless - at least for us Berliners, whose unconditional love for this city can transform any grey street corner into an (albeit imaginary) paradise.

I find myself growing fonder of this city with every step of the tour. At this cozy little restaurant we're greeted by Jana Luepke, the owner, and Leonardo Yomayuza Moreno, the master of empanadas. Noticeably enthusiastic about the collaboration with Eat the World, Leonardo has prepared a presentation about empanadas, which we're going to taste as well. 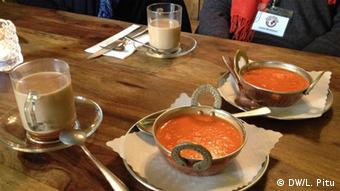 He shares a cornucopia of information, from the etymology of the word (in Spanish, empanar means "to bread") to the carefully chosen ingredients of the savory sauce accompanying it. The restaurant is a new addition to the Eat the World tour and Jana says she's been very happy with this collaboration so far.

See it, smell it, hear it

Second restaurant down, another five to go, and I'm already quite full. Luckily, we're walking between them. Leoni, our tour guide, says that in Berlin it's important to absorb the environment - to smell it and hear it - and that's why the tours are conducted on foot and not with public transport transportation. I totally agree. Berlin's magic is in the minute details; a macro perspective just doesn't do it. 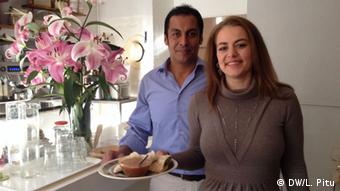 On our stroll, we also tasted Turkish, German and Italian cuisines, stopped into a wine bar, and visited a café or two. Nearly bursting, we wrapped up the tour at the Back Art pastry shop with a "low-calorie" chocolate nut dessert meant to fill any last remaining space in our bellies.

After so many years of living in Berlin, even I also got to know a few holes in the wall I hadn't come across before before, as well as some of the city's talented restaurateurs. It looks like with this kind of culinary tour, you can have your cake and eat it, too.

Call it Central European soul food. As the mercury falls, Berliners seek out restaurants serving traditional food to pack on a few pounds for the winter. Old-school cuisine has the stuff to become a big new trend. (12.12.2013)

DW's Scene in Berlin columnist Jefferson Chase has sampled nearly all of Berlin's home-cooking hot spots, but maintains that his own kitchen can keep up with the best. He shares his version of a German favorite. (12.12.2013)

Berlin isn't an easy place to earn a euro, so many young people are combining two or more business concepts under one roof. The constellations can be pretty adventuresome, as DW's Jefferson Chase finds out. (31.10.2013)