Berlin isn't an easy place to earn a euro, so many young people are combining two or more business concepts under one roof. The constellations can be pretty adventuresome, as DW's Jefferson Chase finds out. 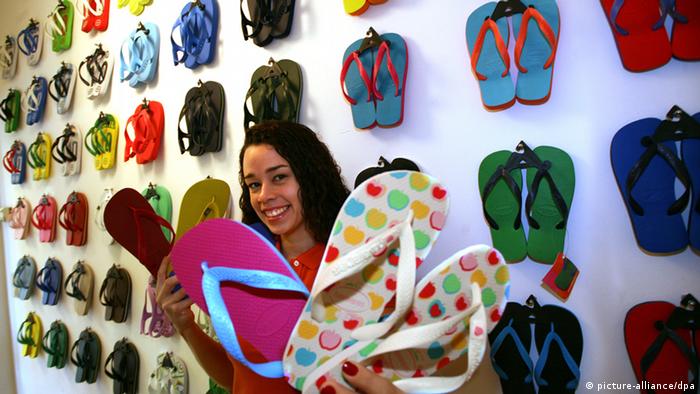 A low-key bit of Grünbergerstrasse in the Friedrichshain district of Berlin is home to a combination business that you certainly won’t find in most cities on this planet: a driving school and wine shop.

The idea is the brainchild of Andreas Wittwer, a trained mechanic, who runs the driving school together with his wife. His brother Matthias is in charge of the grapes. Since 2002, this family business has been attracting double-takes and curious questions from passersby, including me. Are there any customers who come for both the driving lessons and the wine, I want to know.

“No way,” friendly driving instructor Diana tells me. “Our two clienteles are separate - for one thing because they represent two completely different age groups.”

No wine is sold in the driving school, and no driving lessons are held in the wine shop - that was an official condition when the business was licensed. And Diana’s own role is restricted to helping people negotiate their way safely around Berlin’s streets, not teaching them the difference between Barolo and Bordeaux.

When asked why there seem to be so many unusual commercial combinations springing up in Berlin, she just shrugs. 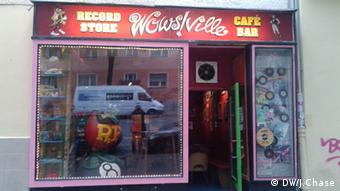 Wowsville is devoted to drinks and vinyl

“It just seems to be a fashion,” she says. “Maybe the reason is that it’s a good way to attract attention. After all, you came in here.”

If there’s a rule to how to combine two or more commercial enterprises, it’s that everything seems to go better with alcohol. In the Kreuzberg district, there’s a jazz record shop that also sells high-end wines. Six or seven streets further on is Wowsville, a rockabilly-, surf- and punk-rock record store that doubles as a bar.

The owner is Alberto, a 40-something Spaniard, who previously ran a record shop in New York and moved to Berlin in 2006. The idea was to open up a CBGBs-esque establishment in the German capital, and the resulting mish-mash has been in operation since 2010. The back room is full of rare vinyl LPs and 45s, while the bar attracts a regular, international clientele of old-school music lovers.

“The hope is that people come for a beer and buy a record for their next DJ set,” Alberto tells me.

The latest addition in the Valencia native’s burgeoning empire is a NYC-style pizza joint across the street. People can grab a slice there and then take it over to the bar, where Berlin’s laws about smoke-free restaurants don’t apply. But when I ask whether this triple-concept is a cash cow, Camarasa just laughs.

Lucrative it may not be, but Wowsville is fine place to while away an hour amidst pleasant company and good tunes. The bartender working on the day I’m there is a woman called Freya from New Zealand, and there’s no way I’m leaving without a couple of beers and a bit of chit-chat about the legendary Kiwi independent music label Flying Nun.

Last week, Freya tells me, she rented a car from a place that doubled as a late-night grocery store and tripled as a betting shop.

Economic considerations do play a role, however, in many combinations and collaborations. In the family-heavy Winstrasse in the Prenzlauer Berg district, for instance, the local organic food store doubles as a café where health-conscious parents can gather over coffee, tea and - yes - beer and wine. Enten und Katzen (Ducks and Cats), as the place is named, is a huge hit.

At the other end of the social spectrum, rising rents caused by Berlin’s sudden and unfortunate attractiveness to foreign investors have begun to effect even down-at-heel areas like Cuvrystrasse in the most eastern part of Kreuzberg. There you’ll find Hazel a designer-furniture store that also serves as a hairdressing salon. 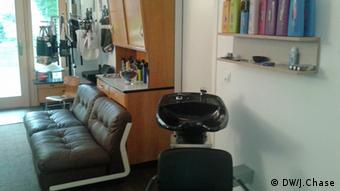 Some of the chairs at Hazel are for hairstyling

The establishment, which has been around since 2011, is the result of three woman seeking strength in numbers.

“I moved to Berlin after Munich and then Hamburg,” says Suzy, one of the hairstylists. “But the rents here now are getting to be what they were there then. We’re three single mothers, so it made sense for us to join forces.”

When I ask whether I can get a haircut in a Panton or Eames chair, Suzy shakes her head, but she does say that the idea is for furniture addicts to get a suitable coiffe and the appearance-conscious to take home some retro gear.

Hybrid businesses may be something of a gimmick, but as I’m cycling home, it occurs to me that they also mitigate what is often regarded one of the worst aspects of capitalism: the reduction of individuals to a single, monotonous job.

Combining X with Y can be a way of maximizing resources or of expanding one’s potential customer base. But it’s also a method of making one’s working life that much more interesting.

Berlin’s music scene is notorious for its unrelenting beats and chemical heart, its constant drive for the new. But a few artisans who hand-craft instruments work hard to keep medieval and baroque chic alive. (25.10.2013)

Even in a fabulous big city like Berlin, you still need many fabulous ideas to make the city's one big shortcoming - weather - bearable for its citizens. The Festival of Lights is up to the challenge. (18.10.2013)

Being 'too sexy' has its downside

Berlin attracts more and more tourists each year, who help buoy the city's budget. But some residents would rather give up the money and keep Berlin's flair for themselves. (04.10.2013)