Berlin faith groups unite for ′Long Night of Religions′ | Germany| News and in-depth reporting from Berlin and beyond | DW | 30.08.2015

In a unique event, religious groups in Germany's capital opened their doors for one night, to highlight the city's diversity and provide an insight into almost 100 faith groups. DW's Kate Brady reports from Berlin.

Despite only 36 percent of Berlin's population professing to having a religion, 93 religious communities from across the city took part in this year's "Lange Nacht der Religionen" or "Long Night of Religions"on Saturday - opening their doors to an estimated 10,000 fellow Berliners.

From Judaism to Paganism, Christianity to Hinduism; sermons, tours, meditation and rituals all took place in synagogues, churches and temples across Berlin's 12 districts.

More than 780,000 of the capital's 3.4 million population come from a migrant background, and from different backgrounds come a diverse collection of religious groups - something which organizer Dr Thomas Schimmel saw as a reason to celebrate and unite.

"It's been a great success," Schimmel told DW. "It's probably the only event where interreligious discussions really take place. 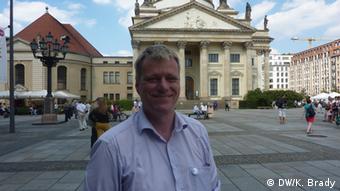 Following an increase in right-wing extremism and racially-motivated attacks in Germany this year, Schimmel said it was exactly this sentiment of the "strange" and the "unfamiliar," which the "Lange Nacht" aims to diminish.

"Religion is actually something peaceful and unifying. Religion isn't what's often portrayed in the media - namely that they're violent and fundamentalist," Schimmel said.

"I hope also that people come who have prejudices so that they can see that Muslims, for example, are completely normal people who want to live peacefully like the rest of us."

Following an inter-religious prayer ceremony in Berlin's "Französische Friedrichstadt Kirche," the event officially opened on the "Gendarmenmarkt" early on Saturday afternoon with an open-air lunch at the "weisser Tafel," a long, white table.

Coming together over a feast of traditional dishes provided by Berlin's Sikh community, hundreds of participants were able to share stories and ideas to shed a little light on their religion.

Ravinder Singh who helped organize the catering said the event, now in its fourth year, had already helped with the acceptance of his Sikhism in Berlin. 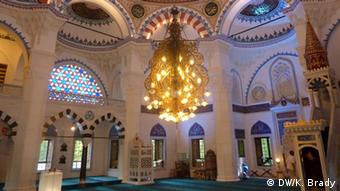 A rare glimpse inside Sehitlik Mosque in Neukölln, Berlin

"We think the understanding about Sikhs is improving a lot. People are getting more chance to know about us, and so in schools our children are also facing fewer problems," he said.

At the Sikh Gurdwara, which Singh attends in northeastern Berlin, visitors even had the chance to take part in a turban workshop to learn about the significance of the headwear, before trying one on themselves.

People behind the religion

Among the guests at the table was Carmen Fonfara, a private tutor who didn't belong to a religious group, but was keen to learn more about her Berlin neighbors.

"I'm interested in inter-religion," she told DW. "Behind every religion are people, and it's the people that interest me," she added.

Like Singh, she, too, deemed the event a huge success.

"What I've already learnt is that different people should congregate together more often," she said

"Regardless of where they're from, regardless how old they are. We need to do this more."

Participating in the "Lange Nacht" for the first time this year was Berlin's "Pagan ways and communities," among whom are the city's Celts, European Shamen, Slavic heathens, witches, wiccans and druids. 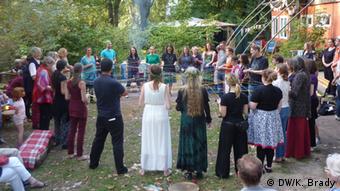 Visitors to the Friedrichshain-Kreuzberg-based community on Saturday were able to experience traditonal Pagan songs and rituals, as well as tarot readings and a ceremony to coincide with Saturday's full moon.

Co-organizer of the group's program for the evening, Moira Denzer, said the Pagan community had received "very positive feedback."

"What we want to achieve is to say that we are here," Denzer said. "We're also people and we, too, are as religious as all other religions."

A whirlwind tour of Berlin's religious community provided fascinating insights into the diversity of a city renowned for its multiculturalism, with every open door shedding light on the history and unique architectural designs of each faith - something rarely seen by outsiders.

A visit to the Jewish Fraenkelufer Synagogue in Kreuzberg, however, provided a sudden reminder of the threats continued to be faced by religious groups which "Lange Nacht" hopes to overcome.

Hoping to observe the Jewish Havdalah ceremony, which marks the end of the Sabbath, visitors arriving at the synagogue were first greeted by a police officer - regularly stationed at the gate - before going through a body scanner and bag check.

"It's really this bad?" one woman asked incredulously. 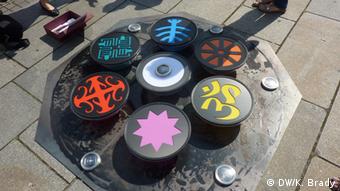 Peace Lights: each illumination represents a faith, with the white light in the middle uniting humanity

"You know what it's like," replied the man operating the scanner. "Just look at France. It's the same everywhere," he added, referring to January's deadly attack on a Jewish supermarket in Paris.

'Unity of all people'

Under a bright full moon the event was drawn to a close shortly before midnight on Saturday with one final inter-religious prayer in front of the "Deutscher Dom."

At the center of the congregation stood a light display created by light artist Leo Lebendig. The project titled "Peace lights" represents five faiths, each with a different color and a symbol of religious significance.

In the center shone a single white light symbolizing everything which the "Long night of religions" aims to promote: "the unity of all people and all religions in the divine light of life."