Belgium remains without an official government one year after elections | Europe | News and current affairs from around the continent | DW | 13.06.2011

Despite numerous failed attempts to form a coalition government, Belgium's major political parties remain unable to come to an agreement over how the linguistically divided nation should be administered in the future. Belgians are demanding a solution to political crisis

A year after Belgium's last election cycle, the linguistically divided nation still has not formed an official government due to intractable disputes between the Dutch and French-speaking communities, raising fears that country could split.

Although Prime Minister Yves Leterme officially resigned his post a year ago, he continues to run Belgium as the head of a caretaker government. Belgium, home to the European Union and NATO, has beaten Iraq as the modern state going the longest without an official government.

Belgian King Albert II has sought to mediate negotiations between the Dutch and French-speaking parties several times to no avail. The Belgian King called on French-speaking socialist leader Elio Di Rupo to form a government last month, but there has been little progress.

"After so much determination, we will maybe have a new government in the next few months," political analyst Pierre Vercauteren told the news agency AFP.

The June 2010 polls saw the rise of Bart De Wever's separatist N-VA party, which represents the majority of the country's 6.2 million Dutch speakers in Flanders.

De Wever's party is calling for wealthy Flanders to be granted more fiscal autonomy from poorer Wallonia, which is majority French speaking. Di Rupo's Socialists came out on top in Wallonia. 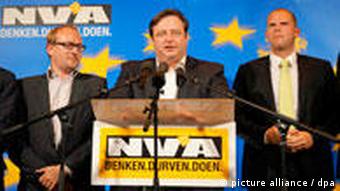 Tensions also exist over language rights in Brussels, which is located in Flanders but has a French-speaking majority.

"Brussels is a little like Belgium's child," De Wever said. "It's up to both communities to find a way of managing Brussels in a satisfactory fashion so that we all reap the fruits of Brussels but also pay its expenses."

Linguistic barriers, however, have consistently undermined attempts to form a coalition government between the two leading parties, with Dutch separatists complaining of French-speaking politicians' poor Dutch.

"Even today, negotiations to form a government take place in French. That, after all, is not normal," De Wever said.

The ultimate goal of De Wever's party is a system similar to a confederation that places more autonomy at the local level. Belgium is already highly decentralized.

"We face a complex problem situation," Di Rupo said. "There are different political goals, and this is a country of coalition, not a country of bipartisan politics and parliamentary majorities. This is a country where we speak three languages, so it's a complex multicultural, multilingual laboratory." The third official language is German, which is spoken by some 74,000 Belgians close to the German border.

The Belgian people remain optimistic that their country will find a solution to its current political crisis. According to a recent opinion survey, two-thirds of Belgians say that a compromise will be found.

The proportion was highest in French-speaking Wallonia at 79 percent followed by 74 percent in bilingual Brussels and 62 percent in Dutch-speaking Flanders.

Belgian politicians elected in June have been unable to form a new government for 290 days and counting - an international record. The biggest hurdle involves economic disparity between the country's two main regions. (30.03.2011)

Belgium's negotiator between the country's deadlocked parties has quit, calling the situation impossible. Belgium has been without a government for more than nine months. (26.01.2011)

As Belgium's political crisis drags on to never-before-seen lengths, the country's king has told his appointed mediator he cannot quit. Now the lack of an elected government has started to affect the country's finances. (12.01.2011)