Belgium's negotiator between the country's deadlocked parties has quit, calling the situation impossible. Belgium has been without a government for more than nine months. 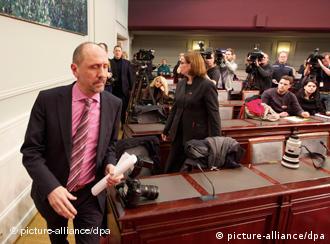 Prospects of resolving the long-standing political crisis in Belgium received another set-back Wednesday, when the mediator between the country's deadlocked political parties quit his post.

Johan Vande Lanotte gave his resignation to Belgium's King Albert II, the Belgian palace announced. He had tried to quit earlier this month, but the king persuaded him to continue his efforts.

Belgium has lacked a government since its last ruling coalition collapsed in April 2010. Vande Lanotte, a former Belgian socialist leader, headed the fifth effort to broker a deal between seven political parties since then.

"I have informed the king there was no possibility of breaking this impasse, and that there is no real prospect of progress," he said at a new conference. 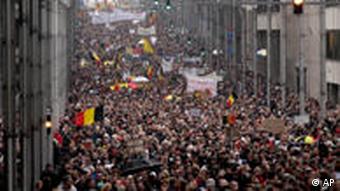 Belgians are fed up with their politicians

The deadlock comes from a dispute that follows Belgium's regional and linguistic divisions. Dutch speakers in the prosperous north - about 60 percent of the country's population - have demanded greater autonomy for their region, especially in economic and social policy. French speakers in the south, meanwhile, are afraid of losing funding if the north breaks away.

Dutch-speaking nationalists did well in elections last June, winning the most votes of any party but not enough to take power. Since then, a caretaker government has run day to day affairs in Belgium.

The situation could start to have economic repercussions, despite the fact that Belgium has weathered Europe's financial crisis relatively well. Ratings agencies have warned they could downgrade Belgium's credit rating if it continues without a government.

Last week, more than 30,000 people marched in the capital city of Brussels to demand politicians form a government.

Wednesday marked the 227th day since Belgium's ruling coalition collapsed last April - the longest time a European country has ever gone without a government.

Belgians rallied in the streets of Brussels on Sunday, calling for an end to the political impasse that has seen their country go without a formal government for more than seven months. (23.01.2011)

As Belgium's political crisis drags on to never-before-seen lengths, the country's king has told his appointed mediator he cannot quit. Now the lack of an elected government has started to affect the country's finances. (12.01.2011)