As Belgium's political crisis drags on to never-before-seen lengths, the country's king has told his appointed mediator he cannot quit. Now the lack of an elected government has started to affect the country's finances. 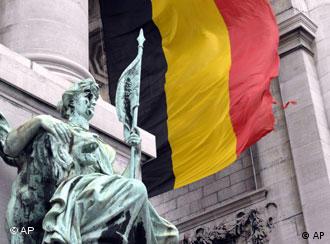 Belgium has long been divided along linguistic lines

King Albert II of Belgium has asked the man he charged with mediating the country's political crisis to continue his efforts, as the country on Wednesday entered its record 213th day without an elected government.

Johan Vande Lanotte, 55, had tendered his resignation to the king last week, fed up with the political deadlock between Dutch- and French-speaking parties. King Albert refused his resignation and asked him to continue negotiations.

"In this way we can preserve the well-being of all the citizens of our country," the statement from the palace said.

Vande Lanotte last week presented a compromise plan to the parties in parliament that would reform the state, giving more autonomy to the country's three regions - Dutch-speaking Flanders, francophone Wallonia and the bilingual capital Brussels.

The plan was rejected by the Flemish nationalist N-VA, which advocates for the separation of wealthier and more populous Flanders from the rust belt of Wallonia.

Vande Lanotte has been tasked with finding a viable compromise

Belgian parliamentary elections on June 13 gave the N-VA and the French Socialists the most seats, but no party or faction gained a clear victory.

Prime Minister Yves Leterme has headed a caretaker government since then, making the crisis the longest in Europe's post-war history.

Leterme, acting on rarely-given orders from King Albert, is to present a plan to cabinet members on Wednesday to produce a budget for 2011. While a Leterme spokesman said the plan would not include specific budget cuts, the government's goal is to reduce last year's 6 percent deficit to 4.1 percent or lower.

Belgium until late last year was mostly untouched by the eurozone sovereign debt crisis that shot up borrowing costs in Greece, Ireland and Portugal.

But the political uncertainty has taken a toll on the country's credibility. Yields on the 10-year government bond soared to record highs on Tuesday, and the credit rating agency Standard & Poor's said last month it may downgrade Belgium if no government was formed in a half a year.

Belgium and the Netherlands in political limbo after coalition talks fail

With coalition talks deadlocked in Belgium and the Netherlands, both European countries have been plunged into political crisis. (04.09.2010)

Belgium's King Albert II has refused the resignation of politician charged with forming a new government. Socialist leader Elio Di Rupo has offered to step down, saying he could not reconcile deep political differences. (30.08.2010)