Hundreds of protesters in cars, vans and trucks have headed to the Belgian capital to demand an end to COVID-19 restrictions, despite a ban preventing them from entering the city. A group of "freedom convoy" protesters reached Brussels Monday, with police in the Belgian capital partially blocking the main access routes into the city and redirecting vehicles to a car park on the outskirts.

Brussels mayor Philippe Close told local RTBF radio that a total of 400-500 cars and vans had been spotted en route to Brussels. Most of the vehicles came from France, where a similar protest took place over the weekend.

"It is a matter of not allowing the Belgian capital to be taken hostage," Close said.

He said protesters might be allowed to enter Brussels on foot, although authorities have banned vehicles in the Canada-style protest convoy from entering the city. 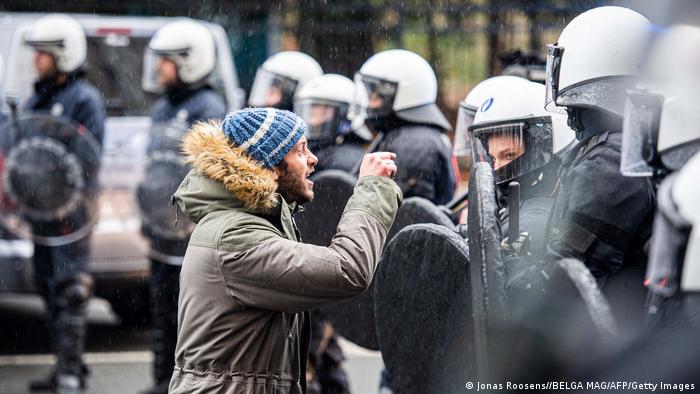 Protesters make it into Brussels despite counter measures

Reuters news agency reported seeing around 150 to 200 protesters in the city center.

A French protester called Philippe, who traveled from the weekend's protest in Paris, told members of the media that he was protesting for his children.

"I came particularly for our children's future. I don't see how my children can live in the world as it is now. Freedom is swept aside, there's more and more poverty. Even when you work,when the 15th of the month comes round, you haven't got enough to live on," Philippe said.

A similar ban did not prevent protesters from converging on Paris in neighboring France over the weekend.

They blocked roads and caused traffic jams around the Arc de Triomphe in the city's center.

The "Freedom Convoy" protests began in Canada, with Canadian truckers opposing a vaccine mandate for cross-border transport. However, the movement has sparked similar protests in Europe.