Conservative politician Theo Francken joked that bailiffs have taken away his possessions​. He owes the government 30,000 euros for failing to appear at a tribunal over his refusal to give visas to a family in Aleppo. 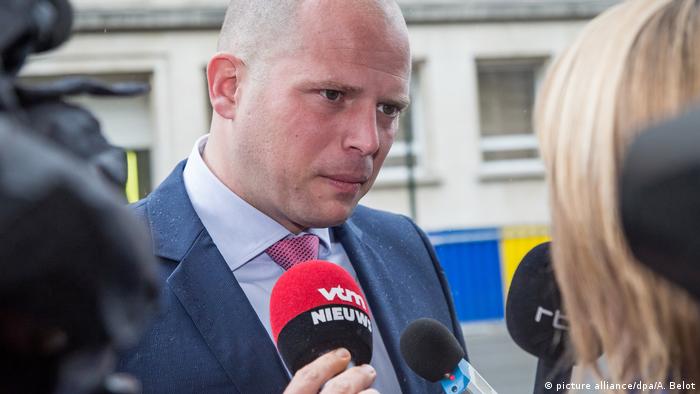 Belgium's immigration minister, Theo Francken, refused to pay a fine on Wednesday amid a deepening row over his refusal to issue visas to a family from the war-torn Syrian city of Aleppo.

Francken is being charged 4,000 euros ($4,439) per day that he does not attend a tribunal over the matter, equating to 1,000 per person in the family. He took to Facebook on Wednesday to post a picture of himself in an empty office, joking that the bailiffs had taken everything to compensate for his debt.

The dispute centers on a family from the besieged eastern side of Aleppo, which has been subjected to fierce fighting between Syrian government forces, moderate rebels and "Islamic State" (IS) terrorists that has killed hundreds of civilians in the past two months. Francken reportedly rejected them for having relatively tenuous ties to Belgium, though friends in the town of Namur have offered to host the couple, and their two children, ages 5 and 8.

"Our people have already shown themselves particularly welcoming during the asylum crisis,” Belgian news agency Belga reported Francken as saying.

"We worked night and day to manage the crisis and were successful. I will not allow this decision which is detached from reality to lead us once again to asylum chaos. I will continue to be opposed. There is no support (for the procedures being realized by the Namur family) among the population."

Although a court has ruled three times in favor of the asylum seekers, Francken has said he believes the government, and not the courts, should be in charge of handing out visas. Francken is a member of the Flemish nationalist N-VA party, which seeks the eventual secession of Flanders from Belgium.

Lawyer: Francken is a hypocrite

Olivier Stein, a lawyer helping the Syrian family, has accused Francken of hypocrisy. The immigration minister "can't cry about migrants drowning in the Mediterranean, then force people to put their lives in danger," he told the Associated Press.

"This is a family who can prove they are in immediate danger of being killed. This is a very special case. We have provided proof of that," Stein added.

The UN estimates that some 275,000 people are trapped between the warring factions in Aleppo, running low on food and medicine while the fighting continues to block any attempt at delivering humanitarian aid.

The foreign ministry in Moscow has summoned Belgium's ambassador following claims that Brussels' fighter jets bombed civilians in a village in Aleppo province. Belgium has denied the charge. (21.10.2016)

The French interior minister expressed anger with Belgium after Belgian police were caught driving migrants into France. Officers said they were bringing the people "in the direction they wanted to go." (22.09.2016)

Belgium has temporarily suspended Schengen rules as it prepares for a possible wave of refugees leaving France. The new measures come as Paris considers evacuating the Calais "Jungle" camp. (23.02.2016)