Protesters took to the streets of the Belarusian capital, Minsk, on Sunday to voice their opposition to a planned Russian military air base. But some believe the former Soviet state has little choice. 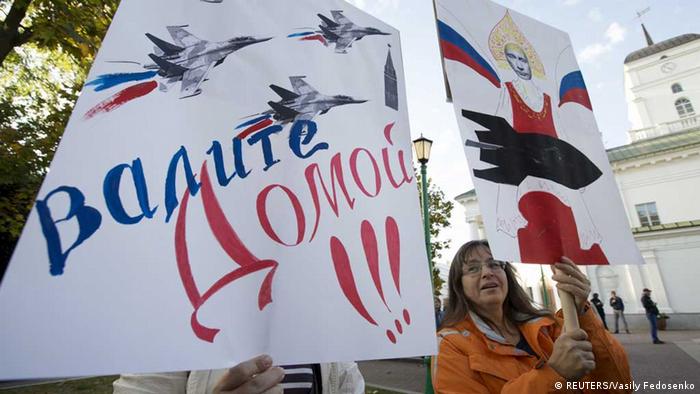 Around 1,000 opposition activists marched through Minsk on Sunday, chanting "No foreign military bases!" and waving placards reading "We want a peaceful sky."

They say the Russian base would make it impossible for Belarus to maintain neutrality between the West and Moscow, and add to regional tensions over the conflict in Ukraine.

Russian President Vladimir Putin gave orders for his ministers to agree a deal over the base with Belarus in September.

While he hasn't commented on Putin's initiative, analysts say Belarusian President Alexander Lukashenko has little choice over the matter. His government depends on cheap energy supplies from Russia, and Belarus is a member of a Moscow-led economic union.

One opposition leader said the base was a point of no return for Lukashenko.

"After this, Belarus will become a full vassal of the Kremlin and Lukashenko will not be able to stay neutral," said Alexei Yanukevich.

Some Eastern European nations have become nervous over Russian expansionism, since Moscow seized the Crimea region from Ukraine in March 2014. But Lukashenko has remained largely neutral over the Ukraine conflict, while relations with the EU have improved slightly.

Sunday's protest comes a week before a presidential election is expected to give Lukashenko a fifth term - with challengers being the leaders of two pro-government parties and a little-known opposition activist.

"No one doubts Lukashenko's victory," said opposition leader Yuras Gubarevich. "And it is already clear what the Kremlin demanded in return for its support of Lukashenko by supplying cheap oil and gas."