The journalist, arrested aboard a Ryanair flight, said in the video on state TV that staging protests now would be pointless, urging the opposition to wait for a more opportune moment. 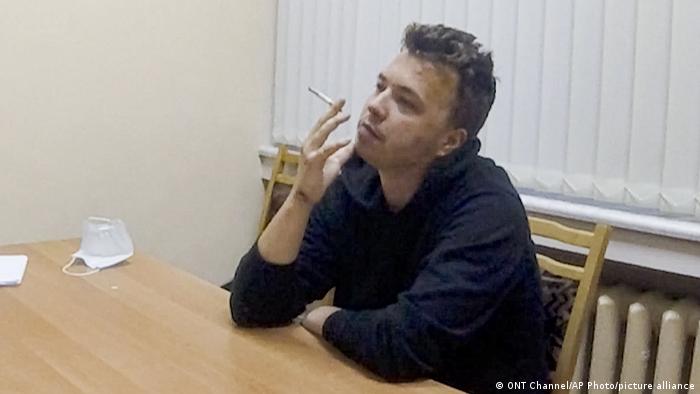 Raman Pratasevich had admitted to charges of organizing protests in a video aired last week.

Belarusian opposition said the 26-year-old journalist was pressured to appear in the confession video. His parents, who now live in Poland, said the confession seemed to be coerced. Nevertheless, the state-controlled ONT channel aired another sit-down with the captive activist late on Wednesday.

What did Pratasevich say?

In his latest appearance, Pratasevich said he saw no point in protesting in Belarus against President Alexander Lukashenko at the moment, saying that the movement has lost impetus.

Instead, he argued, the opposition should wait until economic problems trigger broad public discontent.

"We need to wait until the economic situation worsens... and people take to the street for a mug of soup, to put it bluntly,'' he said.

Pratasevich also said that an unidentified associate had set him up. He explained that he had put a notice about his travel plans in a chat with associates some 40 minutes before his departure.

He speculated that someone with whom he had a personal conflict could have issued the bomb threat, which Belarusian officials at the time claimed as the reason why they forced the flight to land in Minsk.

"The first thing I thought was that I have been set up,'' Pratasevich said.

Ties to the opposition?

Pratasevich accused the unidentified associate of having links with opposition hackers who had previously attacked Belarusian official websites and issued bomb threats.

According to the Associated Press, Pratasevich had noted last month that he had a rift with Franak Viachorka, an adviser to opposition leader Sviatlana Tsikhanouskaya.

Commenting on the video, Viachorka told AP that Pratasevich's comments should be disregarded because he is now "a hostage under pressure," insisting the two had friendly ties.

There was no immediate response from Tsikhanouskaya.

Why is Pratasevich detained?

Pratasevich has become a top foe of Lukashenko as he ran a widely popular channel on the Telegram messaging app that played a major role in helping organize the massive  anti-government demonstrations.

He was charged with inciting mass disturbances and could face up to a 15-year prison sentence.

Belarus had forced a Ryanair flight from Greece to Lithuania to land in Minsk on May 23, citing a bomb threat. Belarusian security forces arrested Pratasevich and his girlfriend, triggering outrage.

The European Union demanded his immediate release and imposed sanctions on Belarus.