In the video, Raman Pratasevich, who was detained when a plane he was on was forced to land in Belarus, admitted to charges of organizing protests and said he was cooperating with the officials. 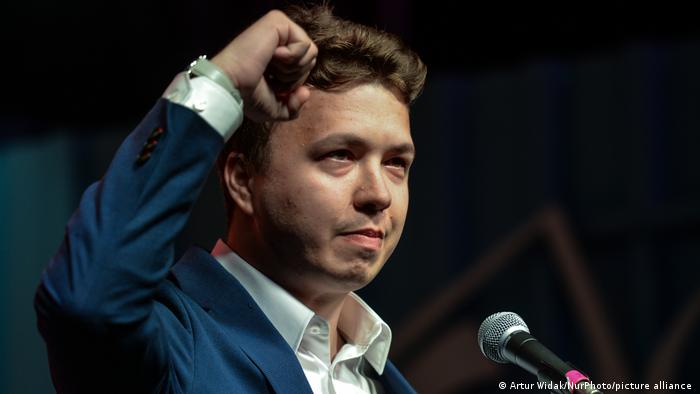 'I continue cooperating with investigators and am confessing to having organised mass unrest in the city of Minsk,' the Belarusian blogger says in the video

In a video circulated by state TV channels on Monday, Belarusian blogger Raman Pratasevich, detained when an Athens-to-Vilnius Ryanair plane he was on was forced to land in Minsk, says he is in good health and that he played a role in organizing mass protests in Minsk last year.

"Yesterday, I was arrested by officials from the Ministry of Internal Affairs at the national airport in Minsk ... I am in Detention Center No. 1 in Minsk. I can say that I have no health problems, including with my heart or any other organs," Pratasevich said in the video.

"The attitude of employees towards me is as correct as possible and according to the law," Pratasevich said. "I continue cooperating with investigators and am confessing to having organized mass unrest in the city of Minsk."

EU leaders discuss what action to take against Minsk

The 26-year-old is wearing a black hoodie in the video and sits behind a table with a pack of cigarettes by his side. Some dark markings are visible on his forehead.

The videa appears on several channels of the Telegram messaging app.

In response to the video, Belarusian opposition Sviatlana Tsikhanouskaya said the blogger  was pressured.

"The regime's propaganda channels posted a video of arrested Raman Pratasevich, saying that he is treated lawfully in the Minsk Detention Center No.1... This is how Raman looks under physical and moral pressure," Thiskanouskaya wrote on Twitter.

"I demand the immediate release of Raman and all political prisoners," she added.

Earlier, the Belarus Interior Ministry said Pratasevich was being held in Minsk and dismissed unconfirmed reports he was hospitalized with a heart condition.