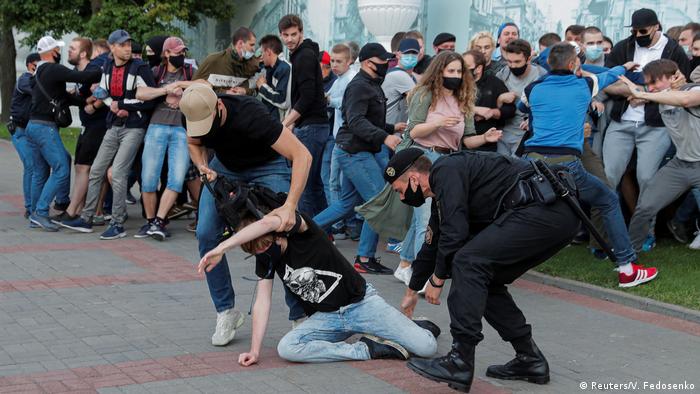 Authorities in Belarus have arrested at least 250 people at protests in major cities, rights groups said Wednesday, a day after the main challengers to long-time President Alexander Lukashenko was barred from standing in next month’s election.

Police threatened many of the protesters with serious criminal charges and said the demonstrations were sparked by "internet provocateurs." Many protesters have already been charged with administrative violations and face fines or short jail times.

Rights group Amnesty International condemned "excessive and unnecessary use of force by police." Arrested protesters were forced to kneel and were hit in the face by police, Belarusian rights group Viasna said.

Residents were venting their anger over the decision to bar two main rivals from running against authoritarian leader Alexander Lukashenko in August's presidential election.

People voiced their frustration at the exclusion of Valery Tsepkalo and Viktor Babariko from the ballot paper, and removing any serious threat to Lukashenko's quest for a sixth term after a quarter-century in power.

Babariko, the former head of a Russia-owned bank, attracted over 400,000 signatures in support of his candidacy, four times more than the minimum required. However, he was imprisoned in June after being accused of taking $430 million (€378 million) out of the country in money-laundering schemes. Rights group Amnesty International recognizes him as a prisoner of conscience.

The Belarusian electoral commission on Monday ruled unanimously that Babariko should not be on the ballot paper as a result of the charges.

Tsepkalo, meanwhile, a former ambassador to the United States and a founder of a successful high-technology park, garnered 160,000 signatures in support of his candidacy for the August 9 election, but the commission said only 75,000 were valid, less than the 100,000 required. Officials rejected Tsepkalo's complaints that the ruling was biased.

Viasna said more than 35 people had been arrested in Tuesday's unrest, including several journalists.

Rallies also occurred in a number of provincial cities, including Brest and Gomel.

Lukashenko, a former collective farm chief, has been president for 26 years. He will now face four opposition candidates in the August vote

The election is still going ahead despite more than 65,000 confirmed coronavirus cases in the ex-Soviet country of 9 million people. Lukashenko has refused to impose strict lockdown measures, describing the virus as a "psychosis."

A military parade marking the 75th anniversary of the Soviet Union’s victory of the Nazis has kicked off in Moscow. The spectacular celebration takes place on the eve of a vote that could extend Putin’s rule until 2036. (24.06.2020)