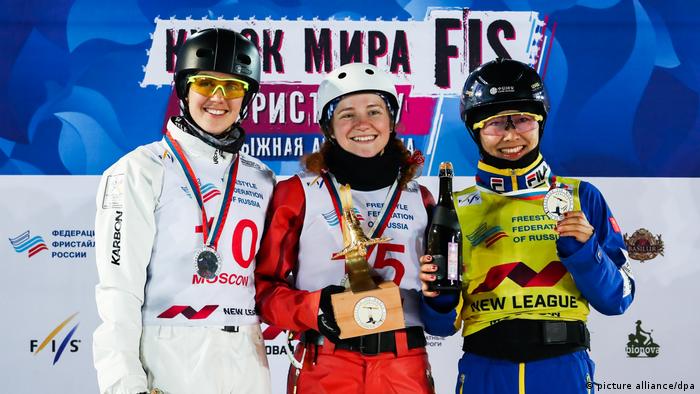 BSSF, an organization that supports athletes sidelined for their political views, said she was detained after a training session on Wednesday evening and is being held at a police station in Minsk.

Ramanouskaya is the 2019 world champion in aerials and the 2019 Belarus Sportswoman of the Year. The 25-year-old competed in the 2018 Winter Olympics in Pyeongchang, South Korea.

BSSF said the reason behind the arrest was not disclosed. An BSSF spokesman later confirmed to DW that Ramanouskaya had been fined the equivalent of €1,000 ($1,150) and been released.

Earlier, BSSF noted that Ramanouskaya has been a critic of President Alexander Lukashenko and had signed an open letter of protest against the 2020 presidential election.

The letter demanded a re-run of the disputed election that saw Lukashenko retain power. It also called for the release of political prisoners.

Mass protests had erupted following the vote and police responded to the demonstrations with force.

Other Belarusian athletes who have voiced support for the protest movement have been jailed.

Earlier this year, Belarusian sprinter Krystsina Tsimanouskaya fled to Poland after she said Belarus team officials had tried to force her to leave the Tokyo Olympic Games and return home. She had publicly complained about national coaches.

Tsikhanouskaya had run against Lukashenko in the 2020 presidential election. She now lives in exile in Lithuania.

Earlier this week, Tsikhanouskaya accused Lukashenko of waging a "hybrid attack" on the EU.

Their meeting comes in the middle of a crisis on the bloc's borders, where large number of migrants are trying to reach the EU via Belarus.