Maintaining good relations with both Kyiv and Moscow, Belarus is neutral ground for talks on the Ukraine crisis. The host country has profited from its position between its two larger neighbors. 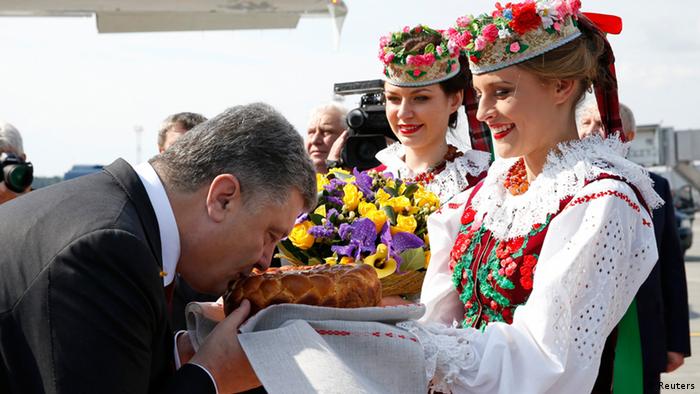 It's no coincidence that Ukrainian President Petro Poroshenko and his Russian counterpat Vladimir Putin are meeting face-to-face in Minsk on Tuesday. Although Belarusian leader Alexander Lukashenko (pictured) has a close relationship with Putin, he has also cultivated good ties with neighboring Ukraine. On Sunday, Lukashenko congratulated Kyiv on its independence day. Putin was conspicuously silent.

A few days ago Belarus and Ukraine lifted all their mutual trade restrictions. But Lukashenko has also been generous in other areas. At the beginning of August, he said that despite Belarus' own needs, it would "help supply Ukraine's economy with petroleum products." In turn, the Ukrainian president thanked Belarus for its support in negotiations to end the conflict in the Donbas region.

On July 31, a contact group made up of representatives from Ukraine, Russia and the Organization of Security and Cooperation in Europe (OSCE) met at Lukashenko's residence near Minsk. They discussed the exchange of prisoners and access to the crash site of the Malaysian Airlines Flight 17, alleged to have been shot down by pro-Russian separatists.

The talks are supposed to focus on economic issues, with the states of the customs union aiming to discuss their concerns about Ukraine's association agreement with the EU.

Kyiv and Brussels, for their part, want to talk about Russian gas deliveries to Ukraine and Europe.

The war in eastern Ukraine is also expected to feature prominently in the discussions.

Ukrainian President Poroshenko, who's trying to integrate his country with the European Union, has not shied from contact with Lukashenko. Once referred to by the US as "the last dictator in Europe," Lukashenko has been in office for two decades, and his regime has been sanctioned by Brussels. It also doesn't seem to disturb Kyiv that Minsk is a close ally of Moscow. 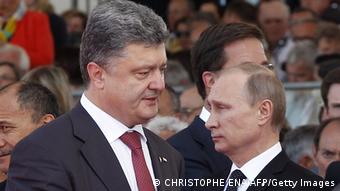 Minsk is the mutual link between Poroshenko (left) and Putin

Since the start of the Ukraine crisis, Belarus has taken a position of neutrality. At the end of February, shortly before Russia annexed Crimea, Lukashenko spoke out in support of Ukraine's territorial integrity. In contrast to Moscow, he immediately recognized the new, Western-leaning leadership in Kyiv.

And in March, Lukashenko assured Ukraine's interim president at the time, Oleksander Turchynov, that Kyiv did not have to fear a Russian invasion from Belarusian soil. The Belarusian leader also congratulated Petro Poroshenko after he won Ukraine's presidential elections in May. Poroshenko invited Lukashenko to his inauguration ceremony.

'Aid' instead of 'mediation'

Astrid Sahm, an expert on Belarus at the Berlin-based German Institute for International and Security Affairs, said that Minsk's "friendship" with Kyiv is "not a new development."

"Despite his rejection of the so-called 'color revolutions,' even after 2004, Lukashenko maintained good contacts to Ukraine's then-president, Viktor Yushchenko," Sahm told DW.

In 2004, Yushchenko came to power through the "Orange Revolution," which ousted the more Russia-friendly Viktor Yanukovych, who had been accused of electoral fraud in the presidential election. Yanukovych made a political comeback and was elected president in 2010 but was then ousted by the recent Euromaidan uprising in 2013-14. Despite all of this, Belarus has maintained good ties to Ukraine, which is why Kyiv has asked Minsk for its support, according to Sahm.

Belarus' close relationship to Ukraine and Russia makes Minsk a suitable venue for negotiations about the conflict in eastern Ukraine. But Lukashenko has said that he doesn't like the word "mediation." He prefers instead to speak of "aid."

So far, Russia has remained silent about Lukashenko's conspicuously friendly relationship with the new leadership in Kyiv. Some observers believe that Moscow wants to maintain the possibly for direct contact with Ukraine via Belarus.

In the future, Belarus could profit even more from its position in the Ukraine crisis. After Russia imposed retaliatory sanctions against the EU by banning the import of European agricultural products, Lukashenko saw an economic opportunity.

"One should move and use the moment to make money," the Belarusian president recently said.

Not only does Minsk want sell more of its own products, it also wants to process foodstuffs from Europe and then export them to Russia.

Ukrainian President Petro Poroshenko has dissolved the country's parliament. The move paves the way for new parliamentary elections that could enhance his government's legitimacy. (25.08.2014)

Russia's top diplomat has announced that Moscow will send a second aid convoy to eastern Ukraine, after Kyiv condemned the first caravan as an "invasion." Meanwhile, clashes have been reported near the Russian border. (25.08.2014)

With the Ukrainian crisis continuing, German Chancellor Angela Merkel took the diplomatic approach during her visit to Kyiv. This not only sent a clear signal to Ukraine, but also to Russia, writes DW's Bernd Johann. (23.08.2014)

A quarter of a century ago the world watched on in fascination as people from the Baltic States formed a giant human chain to demonstrate for their freedom. They have come a long way since. (23.08.2014)