France's ambassador to Belarus has left the country, reportedly following Minsk's order. The move comes after his meeting with a banned civil society group and a diplomatic snub to President Alexander Lukashenko. 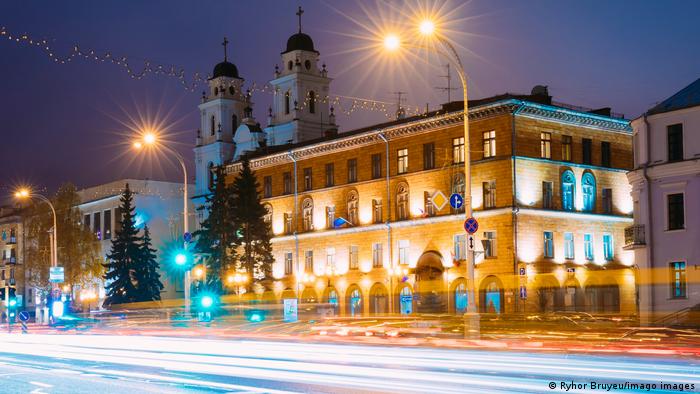 Lacoste had avoided presenting his credentials to President Aleksander Lukashenko, 67, and instead presented them to the regime's foreign minister, Vladimir Makei, an act Lukashenko viewed as a snub.

The French embassy in Minsk also indicated on its website that Lacoste had met last Wednesday with representatives of the banned NGO Govorii Pravdu (Tell The Truth), including the group's co-chair, Andrey Dmitriev, who had been a presidential candidate in last year's contested election.

"He said goodbye to the staff of the embassy and recorded a video message to the Belarusian people, which will appear tomorrow morning on the embassy's website," the French embassy's spokesperson told AFP.

Departure due to a 'unilateral decision'

On Monday, France's foreign minister said that Lacoste's departure was due to the "unilateral decision" of Belarusian authorities. Meanwhile, the Belarusian Foreign Ministry said that the emergency departure of the French ambassador from the coontry was connected with his unwillingness to present his credentials to Lukashenko.

"The head of the French diplomatic mission did not express readiness to complete the procedure for assuming office as Ambassador Extraordinary and Plenipotentiary to the Republic of Belarus, which is stipulated by international law and generally recognized practice,'' said Anatoly Glaz, press secretary of the Belarusian Foreign Ministry.

'Europe's last dictator' tries to hold on to power

France and other EU countries have not recognized Lukashenko as the winner of the contested presidential election last August. His self-declared victory kicked off a wave of historic protests against his rule and his pursuit of a sixth term in office.

Belarus journalist: 'Lukashenko must be stopped and the West should react'

Since the disputed presidential election and the unprecedented protests, his regime has presided over a crackdown on dissidents. NGOs and independent media outlets have been shuttered, and most of the opposition has either fled abroad or been jailed.

Lukashenko has placed the blame for the protests on Western countries and argues it is an effort to foment a revolution.

The US and the EU have issued numerous sanctions against important regime figures and their families, as well as Belarusian state entities. But Lukashenko has so far been able to resist the pressure, partly thanks to Moscow's backing.

Her colleague Svitlana Tsikhanouskaya, who is in exile in neighboring Lithuania, has met with world leaders, including German Chancellor Angela Merkel and US President Joe Biden, to campaign for the rights of Belarusians and a free Belarus.