Lebanon's minuscule Jewish community is rebuilding its synagogue, which was destroyed during the civil war. Lebanese Jews continue to keep a low profile - and the construction site in Beirut is heavily guarded. 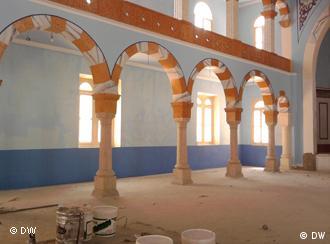 One of the four Syrian workers trundles past with a wheelbarrow full of Damascene marble for the Bat Zion, where the Torah will one day be kept, oblivious to the commotion outside the gate. The guard is shouting into his radio, to the deafening tune of the pneumatic drill from the neighboring construction site. Across the road from the synagogue, yet another luxurious apartment block is growing into Beirut's skyline.

Isaac Arazi, a softly spoken man in his sixties and the self-declared head of the Jewish community in Lebanon, is apologetic for the delay. Security is tight around the synagogue and likely to remain so, even once the building work is completed at some point next year. "There was an attack a month after we started building back in 2009," Isaac explains. A deranged man, he says, threw a Molotov cocktail at the building site.

Is Isaac worried that something similar might happen again? He shrugs and gestures to former Prime Minister Saad Hariri’s residence overlooking the site. A five-minute walk from the synagogue, several armed men dressed in black are lounging by the residence's entrance, while a sniffer dog is inspecting the boot of a car.

Someone, maybe the Colonel, has sent one of the men to the synagogue. He trails behind Isaac, looking bored. "No photo," he suddenly barks. No, a picture of the small Star of David chalked on the light-blue wall of the gallery overlooking the empty room below, which will one day house the congregation, is impossible: the as yet paneless window faces Hariri's residence. 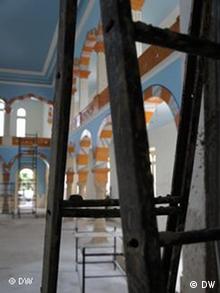 Saad Hariri's father, Rafik, Lebanon’s post-war prime minister, pushed the transformation of the ruined downtown area through Solidere, a publically listed construction company. Luxury boutiques and trendy cafes and bars have grown out of the ruins, turning downtown into an expensive - and highly controversial neighborhood.

Not so the reconstruction of the synagogue, located in the old Jewish neighborhood of Wadi Abu Jamil. All political parties, including the Shia militia and political party, Hezbollah, gave their consent. "We accept all people: Christians, Jews, atheists," Ibrahim Moussawi, the spokesperson emphasizes. Hezbollah, he explains, has no problem with Jews, only with Israel.

The current Prime Minister, Najib Mikati, in an interview conducted via twitter, says he is proud that the synagogue is being built: the proximity of churches, mosques and a synagogue is a sign of "the religious diversity at the heart of Beirut."

Jewish coexistence with Lebanon's other religious communities was historically peaceful and amiable, according to Kristen Schulze, a professor at the London School of Economics and the author of "The Jews of Lebanon." Jews, Schulze writes, were just another minority in Lebanon's sectarian and religious patchwork.

In contrast with other Arab countries, following the creation of the State of Israel in 1948, the number of Jews living in Lebanon actually increased. An estimated 14,000 Jews lived mostly in Beirut, but also in the coastal towns of Tripoli and Saida.

The Lebanese Civil War, which started in 1975 and was to rage until 1990, turned the Jewish quarter into an embattled no man’s land: the dreaded Green Line dividing the city in two, ran through the Jewish neighborhood, separating Christian East Beirut from the mostly Muslim and Druze neighbourhoods in the West. Snipers and constant shelling turned the area - and the synagogue - to abandoned rubble. Many Jews, as well as Muslims and Christians, fled the country.

'I couldn’t find any Jews'

With the Israeli invasion and subsequent occupation of Lebanon in 1982, the former coexistence was finally shattered. Some Islamist groups associated the Lebanese Jews with the Israeli occupier, Schulze says, even though the majority of those emigrating left for Europe or the United States - not Israel.

Today, the Jewish community is estimated to number about 200. In his office in Downtown Beirut, Nabil de Freige recalls how he went on a quest to find the remaining Jews in Lebanon, after he was elected to Parliament in 2000. "I tried to find a Jewish representative," the MP representing the seven minority groups out of Lebanon’s 18 recognized religious sects explains. "But we couldn't find anyone willing to come forward," he says. He believes Jews may be afraid to identify as Jews and pretend to be Christians.

Isaac Arazi is reluctant to say whether or not he feels afraid. He grudgingly admits that the community is minuscule. But he has a vision: he wants to revitalize the dwindling community through the synagogue's reconstruction. Soon, he says, services, which are now conducted in secret, will be held in the synagogue. Maybe, he says seriously, half smiling, some Jews will even return.

Nothing but a pipe dream? 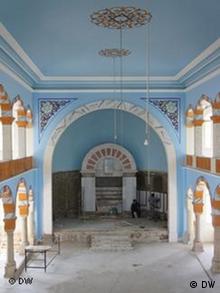 Opening next year in Beirut?

Isaac Arazi’s grand plans are "ludicrous," a Lebanese who migrated to Israel in 1975 says. "The synagogue will be more of a museum than a place of cult, given that there are no people to attend the offices," Isaac Salmassi, who lives close to Tel Aviv, scoffs.

For now, the completion of the synagogue has been delayed. There is not enough marble for the altar, Antony Awad says. "We are looking for the right marble." The decorator has trawled through archives to find pictures of what the original synagogue looked like. The building's sandstone walls are painted light blue, the white stone columns are inlaid with countless tiny fossils. "The columns are priceless," Awad explains, as they are no longer quarried. Finding the right building materials is difficult - and expensive.

Next year, in Beirut

Isaac spends a lot of time in Geneva, Paris and New York, the cities where the Jewish Lebanese Diaspora has settled. Many Lebanese Jews have done well for themselves in their new countries of choice and Isaac Arazi has been tapping into this wealth.

The construction effort is being paid for almost entirely by private funds from the Lebanese Diaspora, as well as some money from Solidere. Not though, de Freige emphasizes, through donations from Israel. "Israel is officially our enemy. And you don't take money from your enemy," he smiles.

If everything goes according to plan, the building works will be completed next summer. Next year, in Beirut, Isaac and his tiny congregation will celebrate Shabat in the synagogue. Security, Isaac admits, will remain tight.

The UN-backed Special Tribunal for Lebanon has issued arrest warrants for the alleged murderers of former Prime Minister Rafik Hariri. But the militant group Hezbollah says it will not support the court. (12.07.2011)

The Lebanese parliament has lifted a ban on Palestinians holding better classes of jobs. But political demographics, economic worries and fears about sending the wrong signals remain major concerns in a volatile region. (17.08.2010)