Before Netanyahu talks, Steinmeier vows to back Israel

On his first trip to Israel as Germany's president, Frank-Walter Steinmeier has expressed his country's "unfathomable guilt." He had visited Israel during his three years as foreign minister. 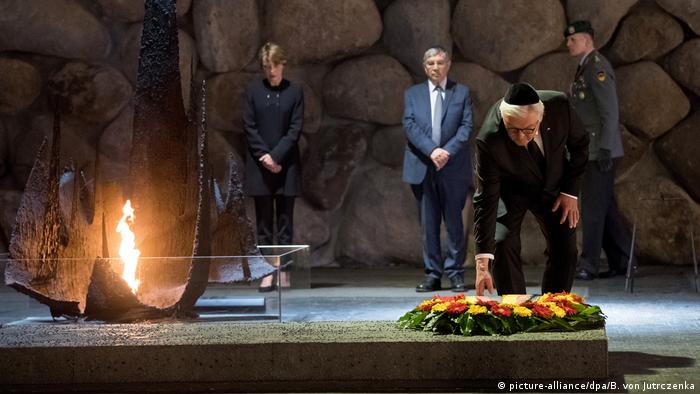 "We Germans have burdened ourselves with unfathomable guilt," Steinmeier said on Sunday, adding that commemorating the Holocaust served as a reminder of his country's "pain, sadness and shame." "As part of taking responsibility for what happened, we stand firmly alongside Israel and are working together for our common future."

Earlier on Sunday, Steinmeier met the writer David Grossman in Jerusalem. The author, whose son died in Israel's 2006 war on Lebanon's Hezbollah, has emerged as a frequent critic of Israel's settlement policy.

Steinmeier, who had a beer with Israeli President Reuven Rivlin on Saturday, planned to meet Prime Minister Benjamin Netanyahu Sunday and Palestinian President Mahmoud Abbas at his Ramallah headquarters in the occupied West Bank on Monday.

The former foreign minister has his work cut out for him after a diplomatic dispute between Germany and Israel escalated in April. Last month, Netanyahu called off an April 25 meeting with Steinmeier's replacement as foreign minister, Sigmar Gabriel, after the German foreign minister refused to cancel talks with groups critical of Israel's government. Gabriel met members of Breaking the Silence, an Israeli veterans group that highlights military abuses in the Palestinian territories, and B'Tselem, which works on a number of rights issues and strongly opposes the expansion of settlements.

Netanyahu's right-wing government has complained that such groups unfairly tarnish Israel's image and provide support to the country's critics. Steinmeier has not scheduled meetings with either group.

Steinmeier played down the recent tensions, saying German-Israeli ties were too important to fight over whom a delegation chooses to meet.

"The foundations (of the Israeli-German) relationship are so broad that I think they can endure some turbulence like that taking place in the last 14 days," Steinmeier said after meeting Rivlin on Sunday.

"The unique relationship of our two states is too important to be measured solely by the question of who a legitimate interlocutor should be," the German president added.

"I believe that we can and should be able to lead an open and honest dialogue with one another, and to my mind, need no new rules."

"We should not impose any restrictions; we should have the trust that friends like we are will be able to interpret what they hear in the right way," Steinmeier said.

Rivlin, who did not cancel on Gabriel last month, said Israel was a vibrant democracy with many different voices, including critical ones. He said Steinmeier's Israel visit would be a chance for both countries to deepen their ties.

Such disputes regularly arise between visiting officials and Israel's government. In February, Israel reprimanded Belgium's ambassador after Prime Minister Charles Michel met members of both B'Tselem and Breaking The Silence during a visit.

About 700,000 people live on more than 100 legally dubious Israeli settlements in the West Bank, East Jerusalem and Golan Heights. In December, the UN Security Council urged Israel to cease its expansion of settlements, which could reduce the amount of land that Palestinians can claim for their eventual state. German officials have repeatedly criticized Israeli settlements.

In a 2015 visit to the Gaza Strip as foreign minister, Steinmeier described living conditions as "catastrophic" a year after an Israeli military assault on the Palestinian territory left about 1,500 civilians dead and thousands more wounded and destroyed much of the local infrastructure.