Germany's foreign minister has described the conditions in the Gaza Strip as "catastrophic." Frank-Walter Steinmeier's visit to the Palestinian territory comes as hopes for reviving peace talks with Israel appear bleak. 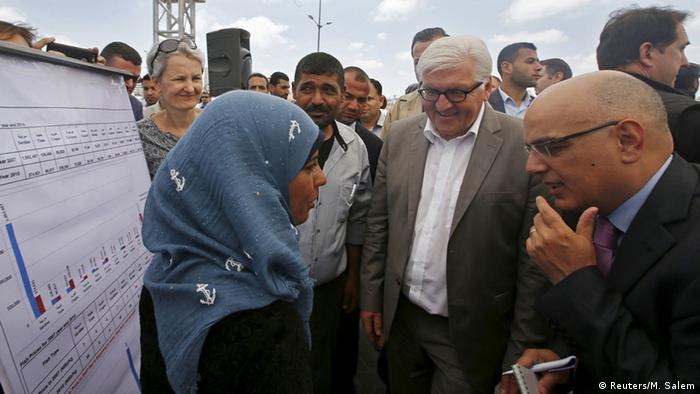 On his visit to the tiny Mediterranean territory on Monday, almost a year since the 50-day war between Israel and Palestinian armed groups, German Foreign Minister Frank-Walter Steinmeier called the situation facing the Gaza Strip's 1.8 million residents "catastrophic."

"We cannot wait until talks about a two-state solution are back on track, to improve living conditions," said Steinmeier, who also visited a UN school for girls built with support from Germany.

Despite billions of dollars having been pledged for reconstruction, there's been little progress in rebuilding the Gaza strip following last summer's war, which saw more than 2,200 Palestinians killed. Gaza's borders are tightly guarded by Israel and Egypt. In a series of statements posted on social platform Twitter, Steinmeier said the status quo was "not sustainable" and that there was a need to "create perspectives" for Gaza residents.

It's rare for top foreign diplomats to visit the Gaza strip. Steinmeier also visited a fishing port Monday (pictured above), but avoided contact with the Palestinian faction Hamas. According to the German news agency dpa, a Hamas source denied rumors that Steinmeier's visit was related to covert talks on a prisoner swap deal between Hamas and Israel.

He warned against a new war.

"We are sitting on a powder keg here. We must make sure it doesn't ignite," Steinmeier said.

His visit to the region, during which he also received an honorary doctorate from Jerusalem's Hebrew University, comes as Germany and Israel celebrate 50 years of diplomatic relations. He is scheduled to fly to Paris next for a meeting of foreign ministers about fighting the militant group "Islamic State."