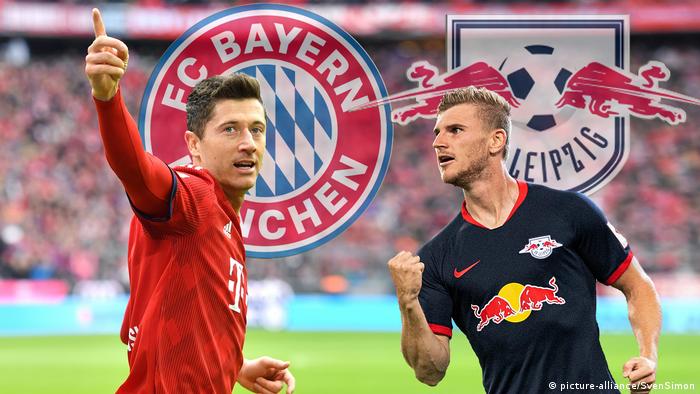 "You can't score in all the matches, unless your name is Robert Lewandowski," RB Leipzig striker Timo Werner noted in November, before going on to cast serious doubt on his words with his performances.

He is right, in a sense. No player, not Lewandowski, not Cristiano Ronaldo, not Lionel Messi, will score every time they take to the pitch. But the Bundesliga currently has two men who, statistically speaking, would be expected to.

At the start of the 2020s, Werner and Lewandowski's goal records read 20:20, with the former averaging a league strike every 76 minutes and the Bayern Munich finisher one every 80 minutes. Such numbers for one player are close to unprecedented in Germany's top flight at this stage of the season. For two, it's record breaking: this is the first time in Bundesliga history that two players have scored 20 goals after 18 matches.

They set a similar record before Christmas and, with 16 games remaining, both are close to the pace required to match, or surpass, Gerd Müller's Bundesliga record of 40 goals in a season, a mark set back in 1971-72, when neither Lewandowski nor Werner were born.

Another of Der Bomber's landmarks is also under threat. The former West Germany international is the only Bundesliga player to date to win the European Golden Shoe, awarded to the player who's scored the most goals in the continent when ranked against a coeffecient based on league strength. Müller did so twice in the early 70s. Werner and Lewandowski sit second and third in the current rankings, behind just Lazio's former Borussia Dortmund forward Ciro Immobile.

The presence of a threat to the Bundesliga's Torjägerkanone (literally translated as goal hunter's canon) that Lewandowski has won in four of the past six seasons, seems to spur the Polish predator on. His two most prolific seasons (2015-16, 30 goals and 2017-18, 29 goals) came either side of Pierre-Emerick Aubameyang's sole crown, when his 31 goals pipped Lewandowski's 30.

As well as the strength, power, athleticism and composure that make him one of the game's finest ever pure strikers, Lewandowski is remarkably durable. Since arriving in the Bundesliga with Dortmund in 2010, he's never made less than 30 appearances in a season and even went as far as to postpone a groin operation until the winter break this term. He was back scoring against Hertha Berlin immediately afterwards, with coach Hansi Flick recently describing his leading man as an "absolute professional".

What next for Werner?

At 31, Lewandowski shows no sign of easing up and his consistency and style are one of the reasons Bayern have been reluctant to add a second top class forward to their ranks. It looks likely to stop them following reported early interest in Werner too.

"Timo Werner is a good player who played an excellent first half of the season," said Bayern sporting director Hasan Salihamidzic earlier this month. "However, we have Robert Lewandowski. Robert is a striker who fits our style of play perfectly. Robert is able to orientate himself in a tight space, has the ability to move in tight spaces and to find extraordinary solutions with the ball."

Even though the Bundesliga champions may not be interested, Werner is not short of suitors. Though he eventually signed a new deal last year that runs until 2023, it is thought to contain a release clause and European and World champions Liverpool are believed to be among the clubs taking an interest in a player whose development has accelerated under the wing of his new coach.

"I've become more versatile under Julian Nagelsmann and have already played in a number of positions," Werner said after scoring twice in a 3-3 draw against Dortmund in December. "I haven't just played out on the left or right like today against BVB but also as a number 10 or lone striker."

Such adaptability may not be a plus for Bayern but it is for league leaders Leipzig, with Werner's ability to find space away from central areas key to their rise to the top of the table.

One win from their next two games will ensure the Red Bulls stay at the summit when they travel to face Lewandowski's side in a critical clash at the Allianz Arena on February 9. That isn't the only summit likely to be hotly contested come May.

Real Madrid right-back Alvaro Odriozola has joined Bayern Munich on loan until the end of the season. The 24-year-old is a much-needed reinforcement to Bayern's injury-ravaged defense. Keep up with all the latest here. (22.01.2020)