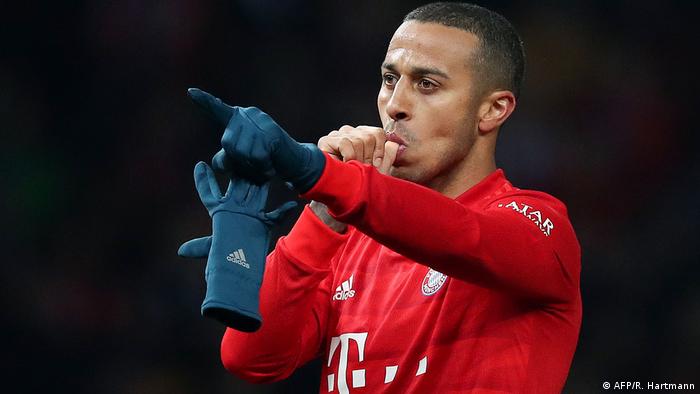 Four wins on the bounce, fifteen goals scored and two conceded. Such runs had become almost mundane for Bayern Munich until very recently. Now though, they bring only increased hope more than the expectation of old. They remain four points behind RB Leipzig.

From the moment Thomas Müller latched on to Ivan Perisic's knockdown, a victory for the champions never seemed in any serious doubt as Hertha collapsed. Robert Lewandowski added a penalty after Leon Goretzka was pulled back in the area and Perisic completed the rout, and an impressive individual showing, with his head. But coach Hansi Flick may well draw most satisfaction from his side's third goal.

While it was the most aesthetically pleasing of Bayern's strikes, the identity of its architect and finisher were more noteworthy than its impact on a game that already looked dead. Goretzka picked up a recovered ball on the right and immediately spotted the forward run of Thiago in the inside right channel. The German slipped in his central midfield partner and the Spaniard whipped a smart finish over Rune Jarstein in the hosts' goal. 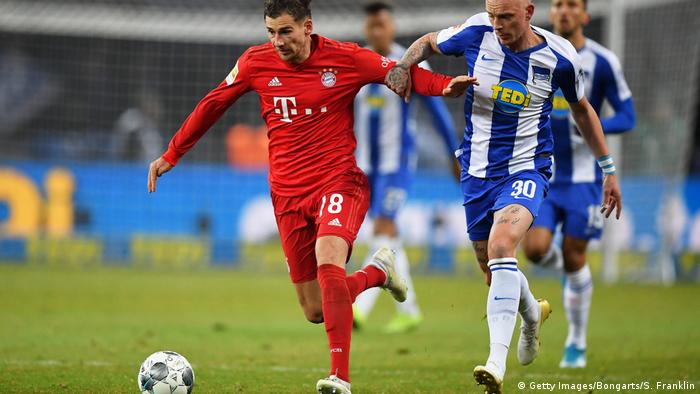 Leon Goretzka on the ball against Hertha Berlin

That was the 28-year-old's first goal for almost a year and Goretzka's second league assist this season - he's yet to score in the league. Bayern have also been short of goals from their other deeper-lying midfield options; Javi Martinez, Corentin Tolisso and Joshua Kimmich have just two between them. In total, those five players also have just seven assists in 3951 minutes (Kimmich and Martinez have both played further back). That's a goal created every 564 minutes (roughly every six games) and one scored every 1317 minutes (just under one every 15 games).

For most of those players, goals are not the primary concern, though their scarcity should still be concerning. Thiago's role is to sit deep and dictate the play, picking holes in opponents whose only goal is to plug them and he did that brilliantly on Saturday despite a wane in his influence overall this term. Martinez and Kimmich are much more defensive-minded and Tolisso, partly thanks to injuries, is still yet to really find his role in Bavaria.

Which leaves Goretzka. The former Schalke man was less influential than his partner in the German capital and has often struggled to exert himself in games this term. He started the campaign with a hamstring injury and is only now showing fleeting signs of the player who started his Bayern career so brightly.

While he's played in various positions for Bayern, Flick and his predeccesor Niko Kovac seem to prefer the 24-year-old at the base of midfield. While Goretzka has a good all-round game, the late, well-timed runs in to the box that helped make his name at Schalke seem to have been curbed.

One reason for that may be Philippe Coutinho. The Brazilian was a touch wasteful again on Saturday and is increasingly showing the propensity to inconistency that's followed him throughout his career. The highlights reel is stunning but there are long stretches in between where not much happens. But, as befitting a man wearing the number 10 shirt, Coutinho wants to find that space just behind Robert Lewandowski, exactly the area Goretzka would naturally power in to.

For now, the Germany international making an attacking sacrifice for the good of the team seems perfectly legitimate. In the trickier games to come though, Flick may be forced to make tough choices in order to find the right balance.

There were ripples, if not yet a tidal wave, of evidence that Goretzka and Thiago may be able to provide stability and pose a threat. And with Germany also lacking goalscorers in the middle of the park, Joachim Löw must have been watching on with interest.

With a genuine Bundesliga title race on the cards, there is more excitement than usual on the pitch. But, as always, there will be just as much to keep an eye on in the stands, too. (17.01.2020)

The Bundesliga returns after the winter break this weekend and the title race is closer than ever — a welcome change. But it will be Bayern Munich, RB Leipzig or Borussia Dortmund who lift the Meisterschale in May? (16.01.2020)