The central midfielder made just 25 appearances for Bayern's first team during his four years at the club. He spent last season on loan at Schalke where he made 30 appearances for the Royal Blues. 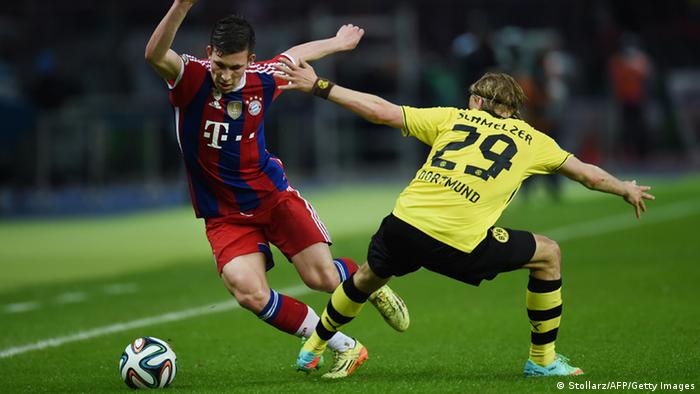 Bayern Munich midfielder Pierre-Emile Hojbjerg has confirmed that he will be leaving the club this summer and has already begun searching for a new team.

The 20-year-old has spent the past season on loan at Schalke but his contract with the Bavarian giants is set to expire next month. Speaking to Danish newspaper BT, the central midfielder confirmed that he is now looking to play his football elsewhere.

“Club hunting sounds a little desperate,” Hojberg said. “I'm going out and finding the right match, I'll go out and find something that suits me. However, it is clear that it does not need to be a top club. I need to find a place where there is perspective.”

Despite a flurry of excitement surround the Danish international whilst coming through the second team at Bayern, Hojbjerg's chances for the first team under Pep Guardiola were few and far between and was ultimately forced to take up loan spells at Augsburg and then Schalke to pick up first-team football.

Yet the Dane doesn't lament the time he spent at the German champions. He added: “It's important there's perspective, because I'm only 20 years old and already have a lot of experience. I have a really good feeling.

“I'm just happy that I have learned and I am happy that I have got so much in there. I know it is valuable for my future. Of course I would like to play for Bayern Munich. It is one of the best clubs in the world, but on the other hand there is a way to get there. And maybe we'll meet again.”

The young talent admitted he wasn't sure where he'd end up next season, but was wiling to state that he was open-minded about the prospect of either playing abroad or remaining in Germany.

“It's about the right match,” he said. “Whether it's Spain, Italy, England or Germany is to be seen.”

Mario Götze says he now wants to stay in Munich

Germany midfielder Mario Götze, who has recently been the subject of strong transfer rumors, has said he wants to remain at Bayern Munich. This came shortly after he announced that he had parted ways with his agent. (23.05.2016)

Mats Hummels has returned to the club he played for as a child, after agreeing a five-year deal. The move comes just days after he captained Dortmund in the German Cup final against Bayern. (23.05.2016)

Bayern welcomed a sea of fans at the famous Marienplatz in Munich to celebrate the club's German Cup title. It was also the last time Pep Guardiola would address the Bayern fans before moving to England. (22.05.2016)