This week's talking points from women's football include: Wolfsburg and Bayern stay in the title race, Manchester City's Caroline Weir scores a world-class goal during the derby against United. 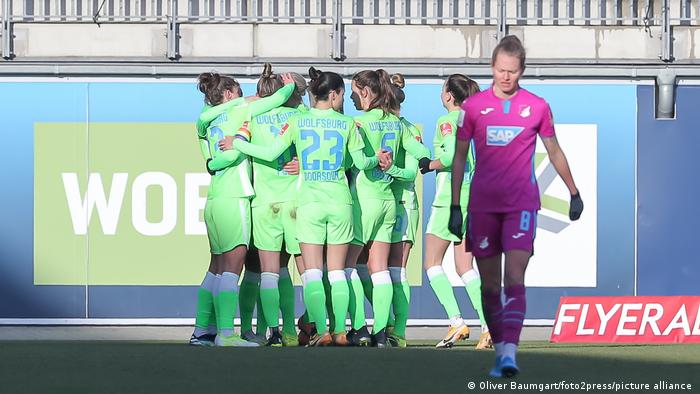 Wolfsburg are still in the title race, but only just

1. Bayern and Wolfsburg remain on top

Four games were canceled because of weather and pitch conditions in the women’s Bundesliga again, but Bayern and Wolfsburg were able to play.

Bayern remain unbeaten and unstoppable after their expected 7-0 win against Werder Bremen (even Marina Hegering got in on the act). Wolfsburg though, had a much tougher time of it against Hoffenheim at home. Svenja Huth’s lucky goal gave the hosts all three points.

Bayern are still league leaders with 42 points, five more than Wolfsburg. Hoffenheim (28 points) are third and will now have to focus on defending third spot, which is just as important considering it secures a Champions League qualifying spot. 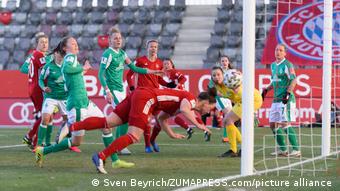 2. Almuth Schult back with DFB

The German women's national team is going to play its first games of the year in February, against Belgium and then the Netherlands. Coach Martina Voss-Tecklenburg selected 26 players for the games, including four uncapped players. Voss-Tecklenburg's biggest surprise though, came by inviting Wolfsburg goalkeeper Almuth Schult to the team for a few days of training.

Schult played her last game for Germany in June 2019, and became the mother of twins in April 2020. Though she's currently third choice at her club and fighting for a chance to be considered again, Voss-Tecklenburg wants to see what level Schult is currently at.

The broadcasting rights for selected games in the Women's Bundesliga in Germany will be streamed by Telekom until at least the 2022/2023 season.

Although some women's Bundesliga games are shown by the Germany's public broadcaster ARD, games on free TV are rare. Only Germany's women's home games are regularly available.

Telekom though, is giving women's Bundesliga clubs more room to show their games. Clubs can stream games not shown by Telekom on their own YouTube channels for this season. Sadly, the agreement includes geo-blocking which means that international viewers are still being left out.

4. Manchester is blue, for now

It's one of the most anticipated derbies in football, and the match between Manchester City and Manchester United in England's Women's Super League didn't disappoint.

The Blues won in the end thanks to goals by Lucy Bronze, Lauren Hemp and Caroline Weir. And the Weir goal was a true stunner, viewed over a million times on social media. The offensive midfielder got the ball near the penalty area, deceived United’s Jackie Groenen with a nice turn and then chipped the ball over goalkeeper Mary Earps. World class!

Melanie Leupolz played in the women's Bundesliga for nearly 10 years before making the switch to Chelsea last summer. She believes that the English league is more attractive to watch than the German one.

"The league in England is very even: Even supposedly weaker opponents have their chances in the game. There is a little less emphasis on tactics, but more on speed. This makes everything a little wilder and more open," she told the Münchner Merkur newspaper. Perhaps that's some food for thought for the women's Bundesliga?