This week's five talking points from women's football include: Wolfsburg and Turbine Potsdam battling in the snow, Pernille Harder asking for better opportunities, and one of the fastest hat tricks in history. 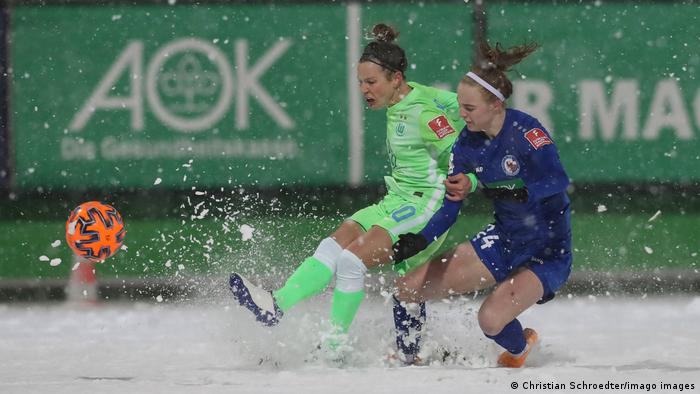 Wolfsburg and Turbine Potsdam kicked off the first game of the year in the women's Bundesliga on Friday evening. But things were made more complicated than expected due to the weather.

While it has been snowing in Wolfsburg for the past few weeks, Friday was on another level, turning the AOK Stadium into something resembling an ice rink.

But the referee decided to play on and both teams struggled. The players slipped, weren't able to control their tackles and the goalkeepers had trouble anticipating the play. While snow isn't always a solid reason not to play, the players' safety didn't seem guaranteed here.

The conditions could also have become a major issue for the home team, considering Wolfsburg can't afford to drop any more points. A loss or draw would have all but handed the title to leaders Bayern, who are five points clear. Wolfsburg won 3-2 in the end, though there was plenty of luck involved.

"To be honest, I've never played a game like this. And I shouldn't have had to either," said coach Stephan Lerch after the game. "From my point of view, it shouldn’t have been allowed to kick off. The snow changed the game completely."

Even Wolfsburg's Zsanett Jakabfi said: "It was sometimes very dangerous for our health. Nobody does it on purpose, but you slip into the opponent. I can't remember playing under such conditions."

While the snow didn't stop the show in Wolfsburg, three games in the women's Bundesliga did fall victim to the weather.

The fixtures between Eintracht Frankfurt and Duisburg, Werder Bremen and Freiburg as well as Essen against Sand were all postponed.

With heavy snowfall forecast in the western state of North Rhine-Westphalia (NRW), Sand had already tried to get their away game against SGS Essen postponed — unsuccessfully. The team traveled to Essen on Saturday morning, where the match was called off after all.

"We knew what was in store for us in NRW. The weather forecast was dark red, but the DFB seemed to have different data," said club manager Gerald Jungmann, issuing scathing criticism of the German FA.

"The road conditions were a catastrophe. People have acted negligently with others' lives."

The club have since announced that they will communicate with the DFB on this matter.

No trouble for Bayern and Hoffenheim

The top three in the women’s Bundesliga remain the same: While Wolfsburg (34 points) consolidated their second place on Friday, Bayern Munich (39 points) maintained their lead after Jens Scheuer's team managed a dominant 7-1 victory over Meppen on Sunday with Klara Bühl grabbing three goals. Lea Schüller (2) and Lina Magull also got on the scoresheet.

Hoffenheim can also still dream of European football and are third (28 points) after their win against Bayer Leverkusen. 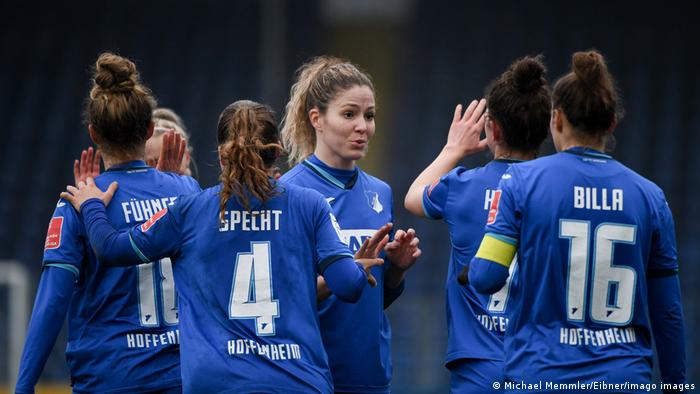 Hoffenheim had few problems in their game this weekend

Meanwhile, in England, Chelsea star and former Wolfsburg player Pernille Harder told Sky Sports that the battle for equality in football needs to focus on facilities and opportunities rather than salaries.

"The question of equal pay and equal salaries will take a while, if it will even ever be the same. Men's football is just on another level I think," she explained.

"Girls have to fight to find places where they can get good training and get good coaches. It's not really there for them. I think that's the biggest issue, for girls to be able to get to a really good academy and access the best coaches at an early age."

The Denmark international was coached by her mother until she was 14.

"Already at that age you can actually learn a lot. Then further on there is still a big difference between how we have it and how men's teams have it. That's what we have to focus on." 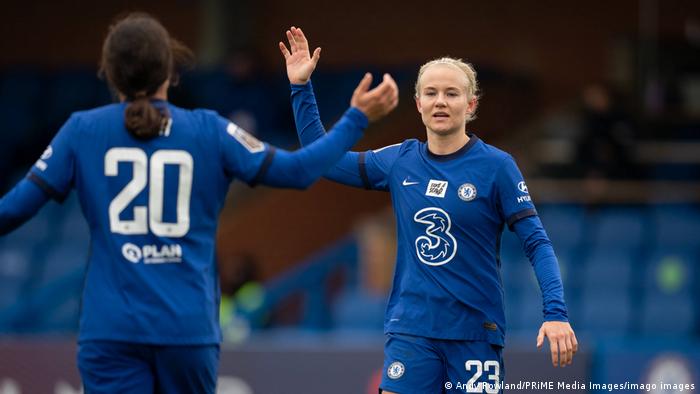 Talking about the situation at Chelsea, she added: "It's very professional, and I think they try to copy how the men are doing it. It's just the difference that we might have three physios, but they have 15, or we have two pitches and they have 10. So that's maybe the biggest difference. The setup is really good, but again it's still not equal."

3 goals in under 3 minutes

It was a game to remember for Real Madrid's Kosovare Asllani. During Madrid's 3-1 victory over Valencia at the weekend, the Swedish international scored a hat trick within 2 minutes, 35 seconds.

Asllani currently has 12 goals in 15 games, and it's obvious that there's plenty more to come from the forward, who was Real Madrid's first-ever official signing back in 2019.

This week's five talking points from women's football include Bayern being crowned winter champions, Bremen returning from quarantine, Duisburg being in trouble and Vivianne Miedema being overlooked – yet again.