Bayern beat Wolfsburg 4-1 on Sunday in one of the most anticipated games in the women's Bundesliga. Marina Hegering, scorer of Bayern's second, tells DW that reaching this point in her career has been far from easy. 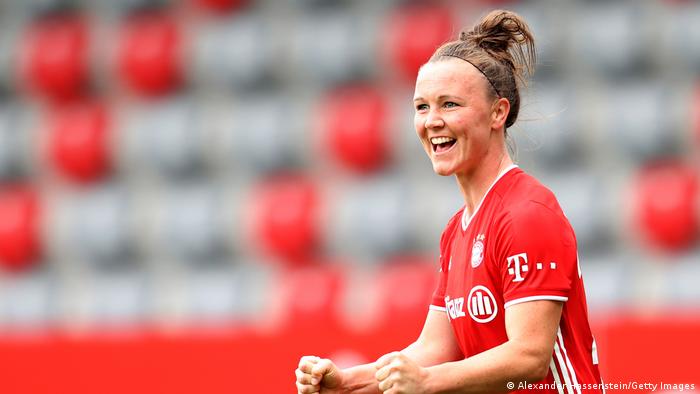 "When it's all taken away so suddenly from one day to the next, then it's very difficult," says Marina Hegering.

The 30-year-old Bayern Munich defender has been playing professional football since the age of 17, but she's had to wait a long time to once again celebrate victory on the pitch.

Hegering had just captained Germany to glory at the 2010 U-20 World Cup and her career appeared to be on the rise – but it came to an abrupt halt when she was forced to undergo heel surgery to correct a foot issue called Haglund's deformity, a bony bump on the heel bone that can be extremely painful, making it difficult to run or even walk comfortably.

"After the surgery, there were problems with the wound healing after material from the surgery was somehow left inside the tissue," Hegering tells DW, recalling the start of her injury nightmare.

"I couldn't even wear normal shoes for almost three years because the pain on my heel was excruciating."

But her competitive nature as an athlete stopped her from giving up. A total of five surgeries and five years later, Hegering was once again able to train and edge closer to making her comeback. It took her an extra year to work on her fitness and finally return to the pitch.

On Sunday, she lined up at the center of the best defense in the Women's Bundesliga as early pacesetters Bayern turned over the team with the best attack in the league, champions Wolfsburg

"[Injury] wasn't going to be a reason to end my career, I just could not accept that," says Hegering. "I think that's what kept me going and kept my hopes alive – that it would all work itself out in the end."

In 2017, a full 10 years after she made her professional debut, Hegering returned to the Bundesliga with traditional side SGS Essen, where she quickly established herself once again at the top level.

But it was in 2019 that her career really took off for the second time. A string of fine performances for Essen earned Hegering her first call-up to the senior Germany squad and she became a regular just in time for the 2019 World Cup in France. She played every single minute of Germany's campaign at the tournament, which saw the team reach the last eight.

"I cannot take for granted that I get to experience this now," says Hegering. "It has taken a huge amount of work but also from those that have supported me along the way," she added.

In the summer of 2020, Hegering started a new chapter in her renewed career and joined Bayern Munich.

Despite being a professional footballer for over a decade, it's the first time that the now 30-year-old has earned a living wage from football. While there have been improvements in the woman's game across Germany, Hegering's case is further proof that there's still a long way to go. 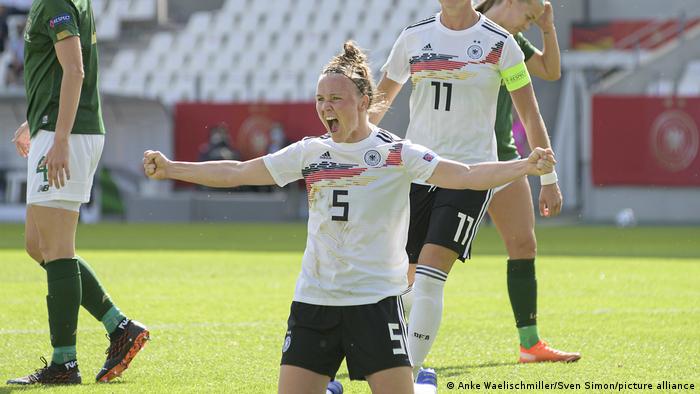 Marina Hegering in action for Germany against Ireland this year

"I mainly either studied, did an apprenticeship or worked while I played football on the side," said Hegering. "The transfer has now made it possible for me to solely be a pro and it's the first time I'm making money only through football."

Unlike their male counterparts, Bayern's women team are yet to become a powerhouse in football. However, they have made great strides in recent years. The club won back-to-back Bundesliga titles in 2015 and 2016 and have been unstoppable so far this season.

With Hegering bossing the defense, Bayern have now won nine matches in a row, conceding just one goal. She has even scored four of the team's 30 goals this season.

"At the moment we are seen as the team to beat but it's still early in the season," she says. "A lot can still happen but we like being at the top and we don't want that to change anytime soon. We feel comfortable in this position."