Bataclan terrorism survivor eases the pain with her pen | Europe | News and current affairs from around the continent | DW | 10.03.2020

Bataclan terrorism survivor eases the pain with her pen 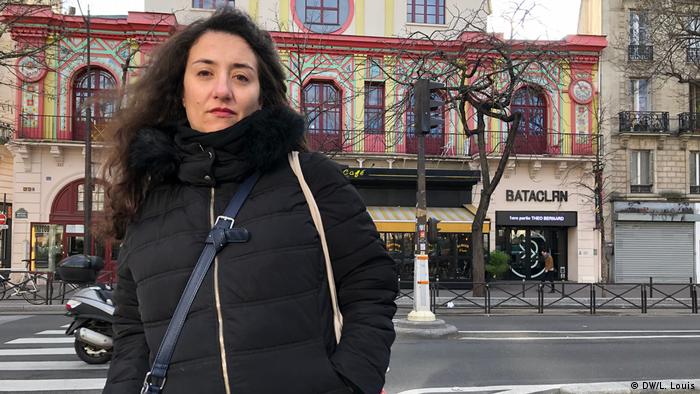 Going back to the Bataclan concert hall is an act of resistance for Catherine Bertrand. The 39-year-old Parisian is a survivor of one of France's worst terror attacks: Three armed gunmen killed 90 people during a performance by the rock band Eagles of Death Metal on November 3, 2015.

"I still have a knot in the stomach when I come here," she said as she stood in front of the venue in northeastern Paris on a cloudy afternoon. "But it's important for me to do this. I started to regularly return in front of the Bataclan a few weeks after the attack as I didn't want to develop a phobia. I love going to concerts and am determined not to give that up. And it's sort of a pilgrimage: I am paying homage to the dead and reminding myself of how lucky I am to have survived."

The massacre was one of several assaults carried out by seven attackers in Paris that night which left 131 people dead. Shootings and suicide bombings also took place at several bars and during a soccer match at the Stade de France national stadium.

France will be commemorating the victims of these and other terror attacks on Wednesday, European Remembrance Day for Victims of Terrorism. Over the past five years, more than 250 people have died in terror attacks in France.

Bertrand survived the Bataclan massacre unharmed. Or so it seemed. Shortly afterward she developed post-traumatic stress disorder or PTSD, which many other victims of terror attacks suffer from. "I kept telling myself that everything was okay — after all, I wasn't physically injured," Bertrand recalled. "I didn't want to see the symptoms. But then I developed so-called hypervigilance — noises like when a door slams shut or something falls to the ground sounded like gunshots to me. I also had auditory hallucinations and imagined sirens or the ringing of bells. And I blamed myself for being alive; the others had died so that I could live on. It felt like I was going crazy."

Her family and friends struggled to understand her state of mind, also because PTSD is still little known as an illness among civilians in France. And Bertrand felt incapable of putting her feelings into words. Instead she chose a method that had been one of her hobbies from an early age: drawing. 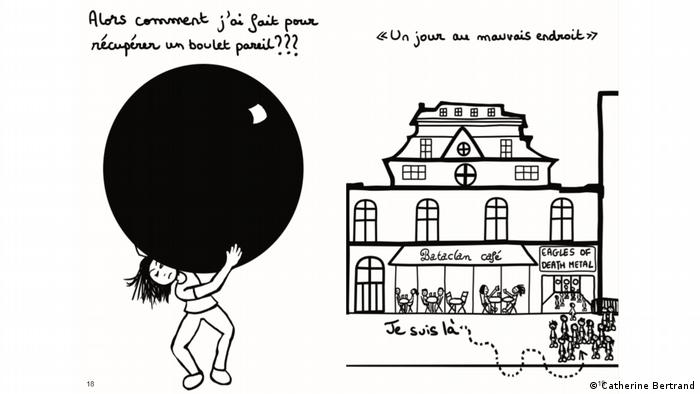 Bertrand's book was published in 2018

"I started to draw one month after the attack. I put all my suffering on paper, and it is a load off my mind. It's like a catharsis," she explained while working on a drawing showing her dragging a huge millstone up a staircase.

"I wanted to make people understand how I was suffering from this invisible injury," she said, adding that the millstone stood for all the symptoms of her PTSD. Other drawings show her having sudden panic attacks, such as when she has to enter a crowded subway or hears the sound of a sledgehammer in the street. They describe how remote she felt from her friends and family and how much effort and professional help it took her to finally get better.

She soon realized the drawings couldn't only help her to feel better. "When I showed them to my fellow survivors they told me that the drawings described exactly what they were going through," she said. "They took the pictures to their relatives and friends and that helped them reestablish links with their loved ones." 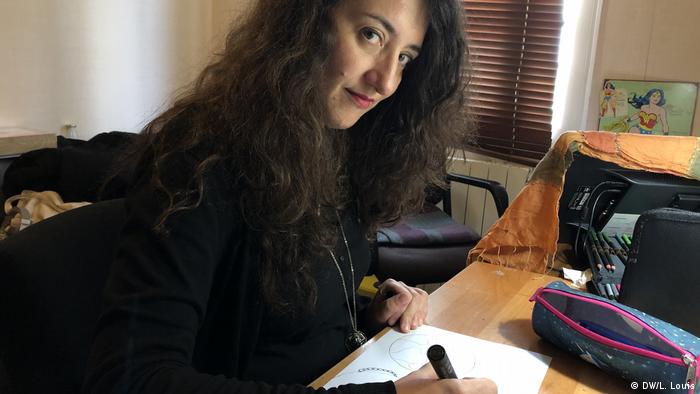 Bertrand turned to everyday life for her second book

So Bertrand decided to have the drawings published as a book. "Chroniques d'une survivante" came out in French in 2018. She plans to have it translated.

"My drawings could help other victims of terrorism or other trauma across the world," she said. "I want to show them that they are not alone in their suffering, and that it's important to get professional help."

The drawings haven't entirely solved her problem, of course. Bertrand still suffers from some symptoms, especially when there are new terror attacks in France or abroad. But she's trying to move on. She has published a second book in which she describes everyday problems, like those of a woman struggling to work from home and take care of her children while she herself is sick. The new book is her way to reconnect with a normal life even as her experiences at the Bataclan changed her forever.

"It's like I am a new Catherine now. The old version of me is dead," she said. "I dare to do a lot of things that I only dreamed of beforehand. I know that I have no time to lose and I want to live life to the fullest. I have become a bit of a go-getter. I used to be an archivist, but I have now trained as a graphic designer and want to blossom in my art."

Bertrand will also keep returning to the Bataclan. She is determined not to give in to the fear the terrorists have awoken in her.