European Commission President Jose Manuel Barroso has called on the EU parliament to give up its national sovereinty posture in the face of the eurozone debt crisis, and tackle the problems together. 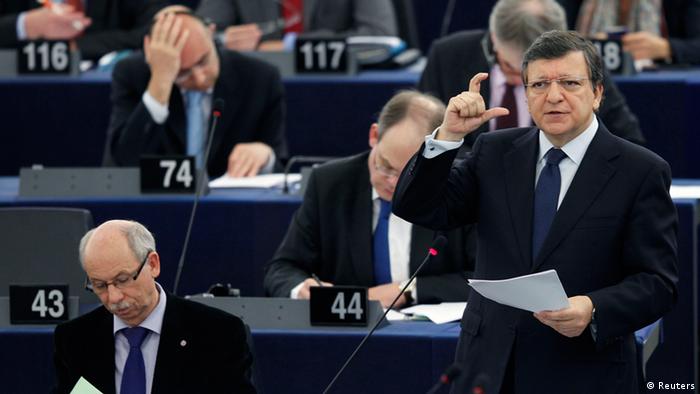 The European commission president is watching the clock. The EU is at a "decisive moment" of crisis management, he said. High unemployment is a "social emergency" requiring both immediate steps and long-term measures, he said.

Addressing the European Parliament in Strasbourg, Barroso spoke out strongly in favor of a fiscal and banking union among the countries using the common euro currency. But many governments are opposed to both. A fiscal union would mean that member states could no longer absorb new debt independently. Their sovereignty, therefore, would be highly constrained, a fact which has met with stiff resistance from the affected national parliaments.

A banking union would make pan-European deposit insurance possible. That's something Germany rejects, because it wants to defend itself against even more liability for weak banks and governments. Barroso appealed to the conscience of the reluctant governments: "I'm not sure if the urgency of this issue is understood in all the capital cities," he said.

More Europe in all fields 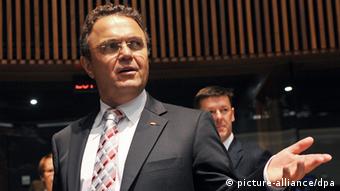 The German interior minister is a backer of more border controls

Barroso's mantra is that greater European integration is necessary in order to solve the debt crisis. But, at the moment, he sees the opposite happening, even when it comes to Schengen, the treaty establishing free movement without border controls within the EU.

A few days ago, EU interior ministers decided they should be able to police their borders again, if there were a threat to public order, such as flows of refugees. Barroso said he regretted the decision "deeply": "This is the wrong signal at the wrong time in a core area of ​​Europe," he said to great applause. It was the German Interior Minister Hans-Peter Friedrich, a Bavarian conservative, who had pushed the national revamp of Schengen.

His CSU party colleagues in the European Parliament in Strasbourg, however, see many things differently. More Europe in all areas, whether in Schengen, or fighting the debt crisis, is also the opinion of Joseph Daul, the chairman of the conservative People's Party faction. Daul asked rhetorically whether the EU would have the courage "to defend and organize shared political sovereignty - or do we move from one crisis summit to the next, as in the last two years, and let the financial markets and banks dictate our laws, our politics, and our social options?"

Sharing risk without giving up sovereignty? 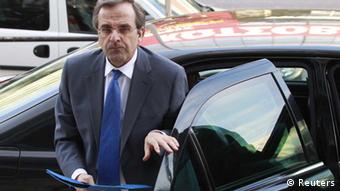 Many in Greece think they can renegotiate the country's bailout deal

Significantly, the wish came from a representative of a country whose banks have just been given a promise of aid of up to 100 billion euros. The German government in Berlin, but also many members of the EU parliament, are very critical of the requests. They believe that without simultaneous fiscal discipline and reforms, any financial support would only amount to transfers from the sound to the unsound states. They also see this confirmed in the latest statements from Greece shortly before that country's election: Antonis Samaras, the head of the conservative Nea Dimokratia and potential election winner, believes he is strong enough to renegotiate the aid program for Greece. But Germany's Finance Minister Wolfgang Schäuble already has said that he does not think Greece has even fulfilled the existing requirements.

No relief for Spain from the proposed bank aid

MPs of various parties noted the sad fact that in spite of the European aid offer for the Spanish banks, the risk premium for Spanish government bonds has risen starkly again. For the British Conservative Party's Martin Callanan, this is proof that the entire Euro-rescue strategy has failed.

"You are creating ever more centralization with the increasingly desperate attempt to control a crisis in which you have failed," he said.

For Callanan and British Euro-skeptics, monetary union was built on sand from the start. But even for them this is no time for gloating because even those countries outside the euro are caught up in the turmoil.

What once seemed unthinkable is now being discussed openly in Brussels. Greece could leave the eurozone following parliamentary elections on Sunday. All sides are playing a high-stakes game of poker. (13.06.2012)

Everyone is at work on what to do in case Greece leaves the eurozone, but not everyone is willing to admit it. And if they are, few details are being made public - leading to a hunt for information for onlookers. (13.06.2012)

A team around EU Council President van Rompuy is working on a plan to save the eurozone. In an interview with DW, Martin Schulz, President of the European Parliament, warns there's too much talk and not enough action. (07.06.2012)