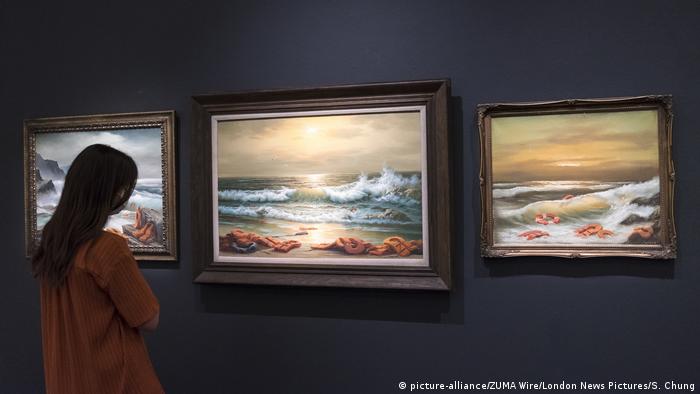 The painting, which had been installed in Banksy's Walled-Off Hotel in Bethlehem set against the Israeli West Bank barrier wall — which the artist says has "the worst view in the world" — will help fund a stroke unit in a Bethlehem hospital and to finance aids for children's rehabilitation.

Stark reminder of the refugee crisis

Each of the three 'found' faux Romantic era oil paintings show a section of Mediterranean coast foregrounded by the ominous scene of life jackets washed up by the waves — serving as a memorial to those refugees, migrants and asylum seekers who lost their lives in the ocean at the peak of the migrant crisis.

"In Mediterranean Sea View 2017, Banksy corrupts three found oil paintings with his own witty reworkings to create something that, while posing as a 19th-Century seascape, spotlights one of the burning issues of the 21st Century," said Alex Branczik, Sotheby's head of contemporary art for Europe.

He also noted that the triptych hangs in Sotheby's galleries as part of the "Rembrandt to Richter" auction alongside works by renowned landscape painters such as Bellotto, van Goyen and Turner. 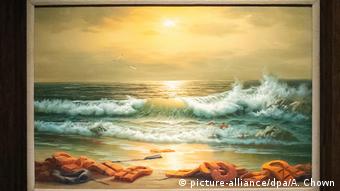 The political dimension of Banksy's message was evident also at his West Bank hotel in December 2019, when the artist installed a work dubbed Scar of Bethlehem, featuring a nativity scene in which Jesus, Mary and Joseph sit in the shadow of Israel's wall. The barrier is punctured by bullet holes, the largest evoking the star over the manger and the reality of Christmas in the Palestinian territory.

That same month, the elusive artist created another Christmas season mural in Birmingham that depicts reindeer doing Santa Claus' work, however the sleigh is a real bench with a homeless man lying on it.

Banksy has also been busy during the coronavirus pandemic, most recently in the London Underground when he boldly entered a train and spray painted his signature rats grappling to apply masks as one rodent sneezes in a clear reference to the aerosols that spread the virus. It was one of several works advocating for better awareness about the coronavirus and ways to combat its spread.

The price fetched at Tuesday's Sotheby's sale is still a long way off the large Banksy painting depicting chimpanzees debating in the British Parliament which sold for nearly $12 million (€10.9 million) at the same auction house last October.

Sotheby's had estimated the 2009 oil painting Devolved Parliament would sell for a fifth of the price. Banksy typically opposed the sale, saying on social media that art should be for the public and not private profit.

Arrests made in theft of Banksy's Paris artwork

French authorities say they've arrested six people in connection to a work stolen from the Bataclan night club in 2019. The image, stenciled on a door, turned up in Italy two weeks ago.

The mural of a mourning girl where the November 2015 terrorist attack occurred in Paris was stolen in January last year. It has now reappeared in central Italy after a joint operation by French and Italian authorities.