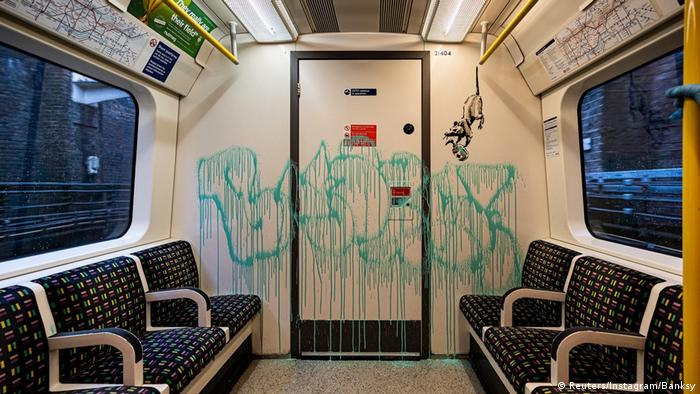 The value of the "graffiti" notwithstanding, it was soon scrubbed off the subway cars

The Bristol-based artist Banksy has been at it again, on Tuesday (14.07.2020) releasing a video on Instagram titled "London Underground undergoes a deep clean," in which he enters a subway train dressed as a masked cleaner wearing high vis (with a "stay safe" logo on the front) but instead proceeds to stencil a series of his signature rats across the carriage walls.

The work, titled If you don't ask, you don't get and posted to Banky's Instagram account, shows one rat grappling to apply a blue mask and another parachuting with a mask. Another rodent sneezes, spraying droplets marked out in light blue paint — an apparent reference to the aerosols that spread the coronavirus.

The same blue paint was used for Banky's tag, and for writing "I get lockdown" across the station wall, to be read before doors reading "But I get up again" close in the foreground. The doors also feature two rats. The sequence concludes the video to the lyrics "I get knocked down, but I get up again," from the 1997 hit "Tubthumping" by UK band Chumbawamba.

Read more: Arrests made in theft of Banksy's Paris artwork

The artwork was soon taken down because it was adjudged to be graffiti.

"We appreciate the sentiment of encouraging people to wear face coverings, which the vast majority of customers on our transport network are doing," said Transport for London in a statement.

"In this particular case, the work was removed some days ago due to our strict anti-graffiti policy."

Banksy was also offered the "chance to do a new version of his message for our customers in a suitable location." 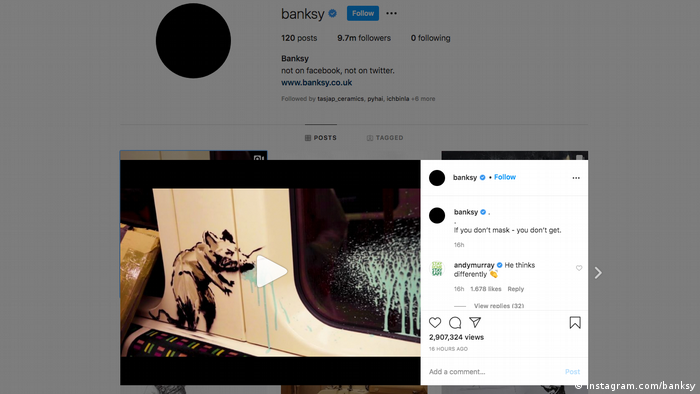 The video of Banksy's rats in the underground quickly went viral, generating 3 million views on Instagram in a less than a day

The world renowned street artist, who has yet to reveal his identity, has been advocating for better awareness about coronavirus and ways to combat its spread. His work in Bristol, Girl with a Pierced Eardrum, was updated with a blue surgical face mask in April — though the action wasn't documented by Banksy himself on social media. A week earlier, he had stencilled rats scampering around a bathroom instead of on the streets as a symbol of the need to stay at home.

And in May at University Hospital Southampton in southern England, Banksy painted a young boy who holds up a nurse as his superhero instead of Batman or Spiderman. An acknowledgment of the heroic work of frontline National Health Service workers, it was titled Painting for Saints and was posted with the caption "Game Changer" on Banksy’s Instagram site.

When artist Banksy half-destroyed his "Girl with Balloon" seconds after it sold for near €1.2 million ($1.37 million) at an auction in October, the artwork seemed headed for the wastebasket. Now it's on show. (05.02.2019)