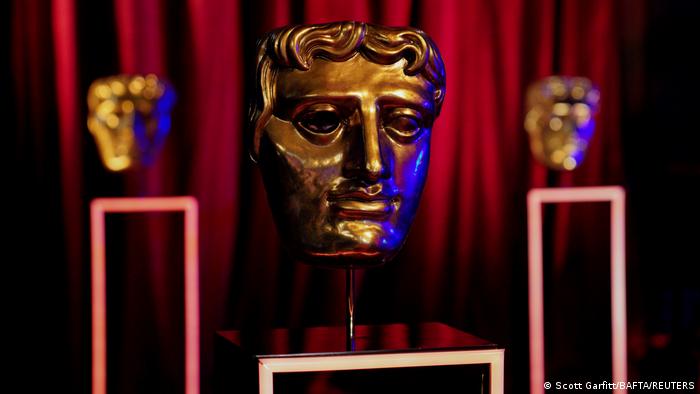 The COVID-19 pandemic has brought about numerous firsts in entertainment, and the 2021 British Academy Film Awards (BAFTA) ceremony is no exception to that. While the event was still held at and broadcast live into the world from the Royal Albert Hall in London, the two main presenters, Dermot O'Leary and Edith Bowman, had to face a rather empty hall without an audience present, while making sure they kept a physical distance. 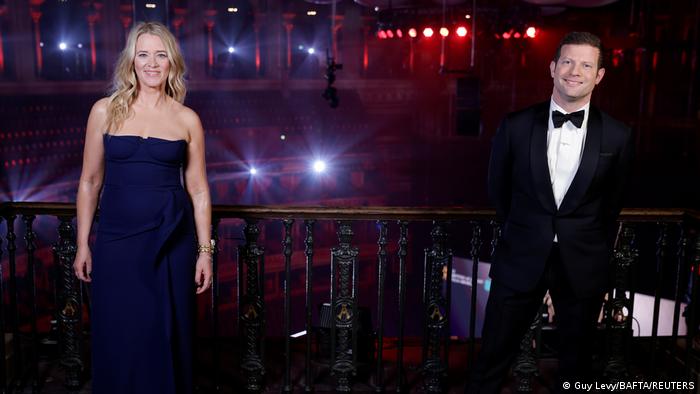 Even a year into the pandemic, keeping social distance on television made for some awkward moments

Throughout the evening, canned laughter and special effects unfortunately failed to fill the space, making at times for rather awkward moments, as the two presenters were merely being joined by a small list of celebrities at the venue to announce the winners, who all accepted their awards remotely without the usual red carpet-glamor.

That overall sense of emptiness was only further magnified by four light columns spelling the word "film" across the stage.

BAFTA chief executive Amanda Berry made it clear from the beginning that this year's ceremony had to be a different affair, driving the message of social distancing home by sporting a visor over her face as she arrived at the Royal Albert Hall, signaling that looking your best for the paparazzi was not on the highest order of priorities this year. The fact that the ceremony went ahead at all was, however, highly welcome, especially for the British film industry, which has been suffering immensely over the past year. O'Leary even said it was incredible that amid the limitations imposed by COVID-19, movies could still continue to flourish — "a bit like getting that ship out of the Suez Canal," he said. 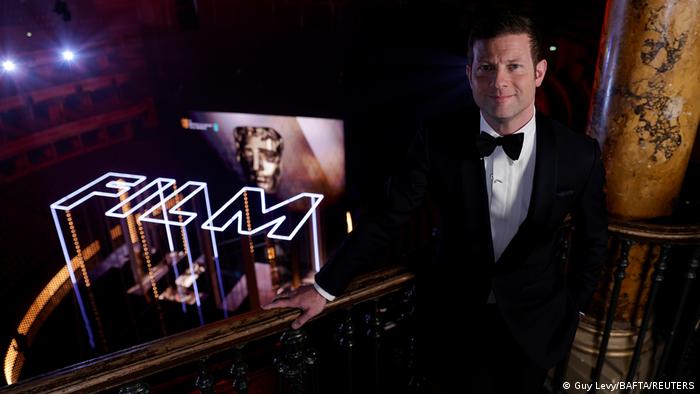 There were many newcomers among the top categories, with a special focus on diversity, following repeated accusations of racism in the the global film industry over the past years. This year's ceremony also was the first time that the event was stretched across two days, with many of the more technical categories being announced and awarded on Saturday already.

At the onset of the ceremony on Sunday, the two presenters acknowledged the recent passing of Prince Philip, the Duke of Edinburgh, who for several years had been the president of the BAFTA academy.

Diversity, pluralism and minorities to the front

Nomadland by Chloe Zhao was the big winner of 2021. The movie won not only the BAFTAs for best director as well as for cinematography, but also took home the awards for best film, while Frances McDormand also received the award for leading actress. The movie follows its protagonist, who lost everything during the 2008 recession, as she embarks on a new path in life living out of her van.

To some, the sheer success of Nomadland came as somewhat of a surprise, as during the first day of the two-day ceremony, Ma Rainey's Black Bottom had become a frontrunner, winning the categories of costume design and make-up and hair. The film, which tells the biography of blues singer Gertrude "Ma" Rainey at the height of her career in the 1920s, had also won multiple awards one week earlier at the Stage Actors' Guild awards in Los Angeles.

That movie's lead actor, Chadwick Boseman, who died last year, was also nominated for the leading actor category; however, that award went to Sir Anthony Hopkins for his performance in The Father, in which he portrays a man who refuses to accept any assistance from his daughter as he ages and develops signs of dementia. That movie also won the award for best adapted screenplay.

Meanwhile, the British-American co-production Promising Young Woman not only took home the award for outstanding British film but also the BAFTA for original screenplay. The movie follows the story of a young woman who seeks to avenge the death of her best friend, who had brutally been raped.

With both awards going to British filmmaker Emerald Fennell, the BAFTAs thus also recognized the importance of women at the heart of the film industry — and not just in the limelight positions.

The rising star award, meanwhile, went to Bukky Bakray for her debut in the low-budget drama Rocks. In her acceptance speech, the 19-year-old acknowledged the countless people whose lives were lost to COVID-19, showing genuine gratitude and wisdom beyond her years.

The film had also won the BAFTA for best casting on the first day of the two-day ceremony, with most actors in Rocks having successfully been cast off the streets of east London.

The BAFTA for best film not in the English language meanwhile went to Another Round — a Swedish-Danish movie about drinking that has been gaining accolades at film festivals the world over. The film follows a group of middle-aged men, who try to avoid their midlife-crises by micro-dosing alcohol throughout their days. The comedy descends into tragic territory without belaboring cliches or becoming overly predictable.

But a foreign film also scored accolades in another category: Korean actress Yuh-Jung Youn won the BAFTA for best supporting actress in Minari. Though a US production, the film offers a rare glimpse into the Korean diaspora around the world in a way that is still relatable to people of all backgrounds.

My Octopus Teacher received the BAFTA award for best documentary. The touching film follows the relationship between an amateur scuba diver in South Africa, who is reevaluating his life while diving in the ocean daily, where he makes friends with an octopus for the duration of a year. The encounter changes the man's outlook on life and allows viewers to reevaluate how they view animals.

The production team thanked, above all, "that special little octopus" that made the film possible in the first place.

Next year, when hopefully a good part of the planet will have had their COVID-19 vaccinations, the BAFTAs should possibly even be more inventive, as the academy will then celebrate the 75th anniversary of the award. That birthday will not go unnoticed in the British capital, which likes to mark such occasions with a lot of pomp and circumstance.

As a virtual awards season nears its end this year, all eyes are now on the 2021 Academy Awards, which is scheduled for April 25, albeit taking place only digitally.