Monumental Nazi-era buildings in Germany have become tourist magnets. These sites, associated with the Nazis, have different ways of dealing with their heritage, but is it "dark tourism" or educational tourism? 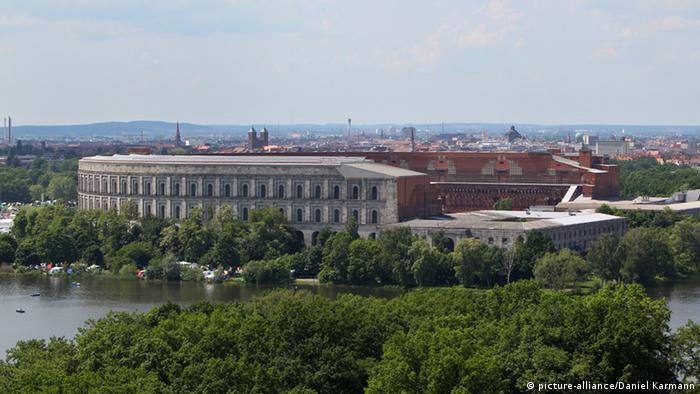 Every 10 minutes a new group of guided tourists stops at the spot on Wilhelmstrasse in Berlin, where Adolf Hitler killed himself in 1945. There is no visible trace left of the underground bunker. These days there is just a cemented area next to the "Peking Duck" restaurant, making it probably the most photographed parking lot in Berlin.

Tourists from the United States, in particular, want to see the "Führerbunker," says Sabine, a city guide in the German capital. But people of other nationalities also seek out the place. The "Führerbunker" drew people's attention as early as 1945 when it was an unwelcome attraction located in the former Soviet sector of divided post-war Berlin.

When it became part of the former East Germany, the bunker was almost completely demolished. All that remained were parts of some walls and the foundation. When these were discovered during excavation work in the 1990s, Berlin's city council decided after long discussions with historians, politicians and archeologists to keep the remains out of sight. It was argued that the remains were too fragmented and that no money should be invested into a site that might attract extreme right-wing groups. 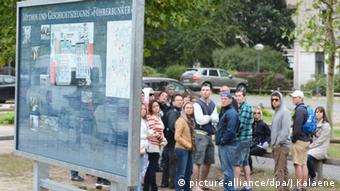 Nevertheless, it has remained an attraction for tourists. "Some tourist guides have invented some outrageous stories about this place," says Holger Happel, a member of the "Berliner Unterwelten" (Berlin Underworlds) association. The group focuses on underground architecture and offers tours of and documents underground locations like shelters from the Nazi and Cold War eras, disused subway train tunnels and brewing cellars. There are no tours to the "Führerbunker" because the association aims to also demystify such places, says Happel, adding: "In 2006, we managed to persuade the authorities that the least they could do is erect a board conveying the most basic information in locations like that to put a stop to the invented stories."

Holidays in shadows of others' suffering

Spots with a dark history attract tourists the world over, but visitors aren't always looking to be informed. Since the turn of the century, a new trend has emerged: tour organizers and cities have extended their tourist activities to places associated with historic horror and suffering. The Institute for Dark Tourism Research (iDTR) at the University of Central Lancashire in Britain, which was founded in 2012, says dark tourism is any travel associated with death, suffering, murder, pain, disaster or the macabre. These days there are actual tours of the manmade disaster site of Chernobyl in Ukraine, which include measuring radioactivity with a Geiger counter and lunch on site. It's also possible to crawl through the tunnels in Sarajevo that were dug during the war in the former Yugoslavia. Other popular destinations include places associated with mass killings like Idi Amin's torture chambers in Uganda. Many of these historically relevant sites are more than willing to take tourists' money, but not all of them provide information or historical background that put the spot's past in context.

Rüdiger Hachtmann, a historian and professor at the Technical University of Berlin, says "dark tourism" tends to focus on relatively recent events. Participants' emotions range from pity to voyeurism and from horror to greed at witnessing something sensational and dark.

"Similar to, but also the exact opposite of, "dark tourism" is the politically motivated educational tour," Hachtmann explains, adding that tourists many want to confront these dark chapters of history not just emotionally but, most of all, intellectually. "It is conceivable that "dark tourism" might encounter 'culturally motivated educational tourism' at one of the Nazi era memorials, such as a tour to the former Auschwitz death camp." But he adds that "hopefully the intention to understand what happened will be the dominant motivation among most tourists.

The monumental heritage of Nazi buildings

At the Nazi party rally grounds In Nuremberg, the largest such site of this era, organizers assume visitors are looking for educational information. 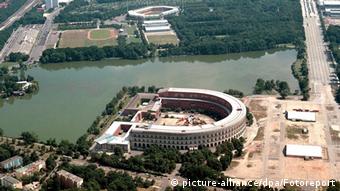 Some 200,000 people from around the world annually visit the Nazi party rally ground's Documentation Center. This 11-square-kilometer (six-square-mile) compound was built according to plans by Hitler's architect, Albert Speer. Hitler held Nazi rallies at the grounds until 1938. The massive rallies served to gain support for the party as well as a visible place for the Nazis to parade their power.

Some of the colossal buildings have survived to this day. Like the building shell of the Congress Hall, which has housed the Documentation Center since it opened in 2001 to educate and inform visitors about the Nazi party and its rallies. The Grosse Strasse, along which Nazi troops paraded, has also survived, as has the Zeppelinfeld (Zeppelin field), where buses filled with visitors arrive at regular intervals. The place where as many as 200,000 people could attend rallies is today partly paved and used as parking lots and sports fields. At one end of the field the grandstand from which Adolf Hitler made his speeches is still open to tourists.

Let it go to waste or repair it? 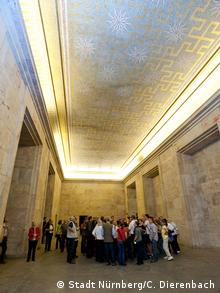 Visitors in the so-called 'Golden Hall' of the Zeppelin grandstand

Hitler's stone grandstand, however, is beginning to crumble. For months there has been a bitter dispute over whether it should be repaired. Citizens groups, like the Nuremberg "BauLust" club are urging caution over what it terms the "Disneyfication" of the grandstand. It's afraid of turning the site into too alluring of a location and thereby attracting "dark tourism." Nuremberg's city council has announced that it is working on a plan that encompasses the entire compound, not just the grandstand. The council argues that once survivors of the Nazi era have died, there will be nothing left but the buildings, places and the stories associated with them. The city has, therefore, decided to carry out repair work in order to keep the site from falling into disrepair but added it will not restore or rebuild any of the buildings.

The Nuremberg council is adhering to the view advocated by many historians who recommend using monumental Nazi buildings as exhibition and information centers focusing the history of the Nazi era. The exact cost for the repair work on the Nazi party rally grounds will be calculated by summer, according to Nuremberg city council. But that will not mark the end the conflict over the site - even if waves of tourists may help to recoup some of the costs.

The Nazi-era block in Berlin

Repair work to a lesser-known Nazi-era construction located not far from the Berlin Südkreuz rail station cost a hefty 1 million euros. The "Schwerbelastungskörper," or "heavy load-bearing body," is a hefty 12,000-ton concrete cylinder rammed 18 meters (59 feet) into the ground, reaches 14 meters into the air and has a diameter of 21 meters. This seemingly useless building was constructed with the use of French forced laborers in the middle of the Second World War. It was deemed an important project and its construction ordered personally by Adolf Hitler. Architect Speer wanted to determine the feasibility of constructing large buildings on the area's marshy, sandy ground, specifically a massive triumphal arch on a nearby plot, which would have been part of the planed Nazi redesign of Berlin into the Nazi capital "Germania." 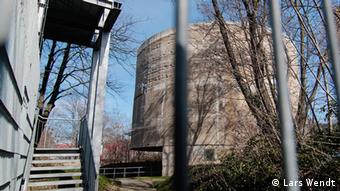 The Heavy Load-Bearing Body (Schwerbelastungskörper): until 2009 one of Berlin's modern ruins.

Today the "Schwerbelastungskörper" concrete cylinder serves as a somber place of information. Not the spectacular locations tourists might expect when visiting sites associated with Hitler and Speer and their mythical, planed "Germania" German capital. An imposing attraction located next to the cement block is a 14-meter tower, which was built for visitors in 2009. The wide-ranging view from the top of the tower is quickly undermined once when it becomes clear it is the exact height of the planed seven-kilometer, north-south axis road that Speer and Hitler envisioned also connecting the government district with the Südbahnhof rail station. 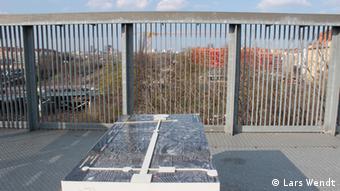 Everything visible from the tower would have vanished into that massive project. One look shows how many houses would have been buried by this plan to create a 120-meter-wide parade road. It also illustrates the sheer megalomania of Nazi regime's monumental city planning. Michael Richter from the "Berliner Unterwelten" association explains: "This is the only place left in Berlin where you can experience the sheer dimensions involved in Nazi city planning - and on a three-dimensional basis, as all other plans are either in model form or on paper."

Securing the future of this unloved heritage

Berlin city council have attempted for years to rid itself of the "Schwerbelastungskörper," but plans to have it blown up, rented out or even sold have failed. The "Berliner Unterwelten" association, however, succeeded in persuading the city council to recognize the historic values of the building that has been listed as a protected site since 1995.

Some 7,000 people visited this place last year, which is not much compared to the "Führerbunker." As time passes and the Nazi era move into the realm of history textbooks rather than lived history, the emotional component that is essential to success of "dark tourism" also fades. In turn, this may mean that information centers in Berlin and Nuremberg - places to educate and help understand what happened during the Nazi era - will gain in importance. Their future in tourism as places that document history is guaranteed. The same may not apply to "dark tourism."

An exhibition at the Dokumentation Obersalzberg museum in Berchtesgaden tells the story of two deceptively beautiful places in Bavaria, Pullach and Obersalzberg, which were tarnished by the Nazi regime. (22.10.2015)

Like it or not, Nuremberg's Nazi past is a tourist attraction

Nuremberg is connected with the crimes of National Socialism in various ways, and the city makes no attempt to conceal its dark historical legacy. DW's Jefferson Chase visited a city coming to terms with its past. (08.05.2014)