They bike hundreds of miles to bring advice and medicine to thousands in remote, impoverished villages. DW has honored the work of Bangladesh's 'Infoladies' with the 2013 Bobs online activism award. 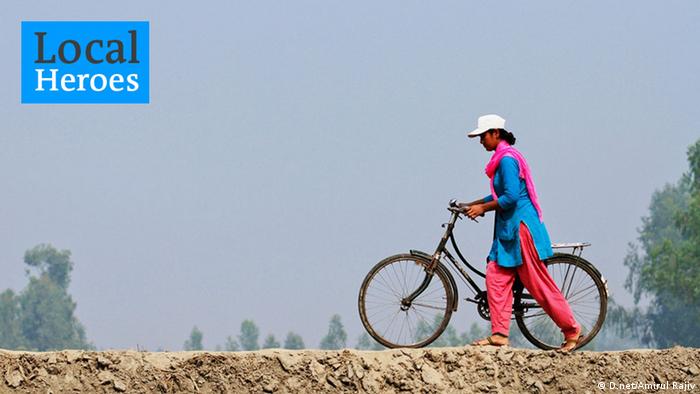 Mahfuza Akter would have rather gone to university, but her family couldn't afford the fees. After finishing high school, the country girl had practically no chance of getting a job in her native district of Gaibandha in northern Bangladesh. But luck stroke in 2010 when she managed to get a job as a so-called "Infolady." For this extraordinary profession, the 25-year-old requires a bicycle, some high-tech devices and plenty of organizational skills.

Equipped with a laptop, a digital camera and an Internet-connected mobile phone, Akter rides to towns within her community every day and offers a variety of ICT-based services as well as legal advice to villagers at their very doorstep. For instance, she helps people communicate with relatives via Skype, finds solutions to agricultural and development issues, and even assists young villagers in writing job application letters.

She also helps the elderly measure their daily blood sugar levels and visits pregnant women who want to manage their weight. If required, Akter even accompanies them to the local administration office to apply for financial assistance. 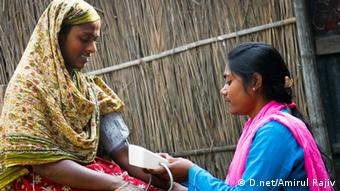 Infoladies provide a variety of services to people in remote villages

As few doctors ever travel to the regions InfoLadies regularly visit, the women are often the only form of medical advice available and when they get stuck on a case, they can call a team of experts ready to assist them wherever they may be.

For her services, Akter is often "paid more than the standard rate," she says. Sometimes customers even invite her to stay in for lunch. "I enable people to do things they would otherwise find difficult to do," she explains, adding that villagers often hold Infoladies in higher regard than even teachers or doctors.

Reaching out to women

Only about five percent of the South Asian country's population has access to the Internet. The government has set up rural information centers called "Pallitathya Kendra," but they are not used frequently.

Trio of bloggers recounts perils of writing in Asia

What's it like to blog in Asia? It depends where you are: in high-tech India, most people remain offline; China's Internet is heavily monitored; and death threats are made against bloggers in Bangladesh. (10.05.2013)

"With the help of the Infoladies people living in remote areas now have the same sort of access to information and services as people living elsewhere," says Hossain Mosharrof, deputy director of Dnet, a Bangladeshi company specializing in social projects.

Dnet is the company that launched the InfoLady initiative in 2007. There are currently around 70 Infoladies working mainly with women and girls as well as with disabled and elderly people, connecting them to the rest of the community.

The fact they are all women is not a coincidence. "The project is about women helping one another and leading self-determined lives," adds Mosharrof, stressing the importance of mutual support, particularly in Muslim communities.

For Akter, becoming an Infolady wasn't easy. She had to undergo a strict assessment process to see if she had the skills required to work with different interest groups in the country side such as farmers and the unemployed. But after completing a 30-day training program she was ready to go. "My mother broke out in tears when I handed over my first pay check," she remembers. Today she makes around 140 US dollars a month, enough to put some money aside.

The Infoladies project won DW's 2013 The Bobs award for the best in online activism in the Global Media Forum category, which focuses on "the future of growth."

"It is a revolutionary project which closes social, cultural and digital gaps," said jury member Shahidul Alam. "Because of the Infoladies, many people now have access to their fundamental rights." 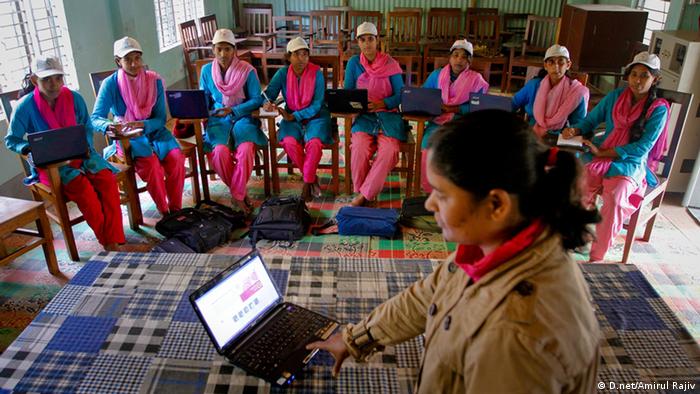 The project founders are convinced of the iniative's potential. "The model is both financially and socially sustainable," says Mosharrof. Since the central Bangladesh Bank acknowledged the project as an innovative and viable model, the Infoladies have received "special conditions" for loans at local banks.

Dnet is seeking expand and increase the number of Infoladies to 12,000 by the year 2017. There are also plans to export the model to other countries such as Congo, Rwanda, Burundi and Sri Lanka.

The Bobs - The DW awards for online activism