Back to war: Somali refugees return from Yemen

When civil war broke out in Somalia, Ali Hassan Suufi and his wife fled to Yemen. But after the Yemeni Civil War began they returned to their home country, which had been ravaged by terror and poverty. On mornings like these, when there is nothing left to eat in the house, Ali Hassan Suufi worries about how he will find the money to send his children to school.  Suufi misses his life in the Yemeni refugee camp, where he lived with his family for 20 years.

"We had a good life, we were content," he says, "We had enough to eat every day, even vegetables and milk for the children. I managed to save about 20 dollars a day from the income from my own restaurant. We lived well, as is only possible in times of peace."

Sadly, those times are long gone. Civil war broke out in Somalia in 1991 and Suufi and his wife Farhiya Abdirahman Mohamed fled to Yemen three years later. Their children were born there and went to school at the refugee camp run by the United Nations. Ali Hassan Suufi and his wife Farhiya Abdirahman with their family inside their small house in Mogadishu.

Suufi was eventually elected to be the spokesman for the camp's 20,000 refugees. But in January 2015, shortly before the outbreak of the Yemeni Civil War, he decided to go home. Not because he expected life to be better there. But he was concerned about the constant bombardments, cholera epidemics and other horrors which come with war. The UN has consistently described the conditions in Yemen as horrendous for civilians.

Strangers in a familiar place

And so Suufi and his wife Farhiya  took a boat back to Somali's capital Mogadishu. But Farhiya says returning home has been a struggle.

"I feel like a refugee, not like someone who returned home," she told DW, "We used to have a house here, which my husband sold to pay for our flight to Yemen. We just thought about surviving the war. Nobody was thinking about the future. Now I feel homeless." 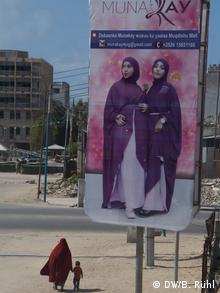 A typical street scene in Mogadishu.

Suufi goes out everyday looking for work. Sometimes he is hired just for the day and brings home 10 dollars. He may end up with 50 dollars for the whole month. But even the most ordinary jobs can be extremely dangerous, as extremist groups like Al-Shabab carry out frequent attacks in and around Mogadishu.

"It is dangerous to work as a cook in Mogadishu," he says, "Twice there were terrorist attacks on the hotels where I worked that day. I was lucky to survive."

Hotels and restaurants are al-shabab's preferred targets in the city center. Although Farhiya worries about the safety of her husband, she knows that they have little choice.

"I worry very much when my husband is working somewhere," she says," On the other hand, the children get hungry and ask me for food all the time. My husband doesn't really have a choice. He has to trust in God and look for work."

Somalis are returning home en masse after spending over a decade in Dadaab, the world's largest refugee camp located in Kenya. Many of them are however returning to a country facing insecurity and extremism. (28.07.2016)

Dozens of people were killed in twin car bomb blasts in the Somali capital, Mogadishu, in what appears to have been a foiled attack on the presidential palace. Islamist militant group al-Shabab claimed responsibility. (24.02.2018)