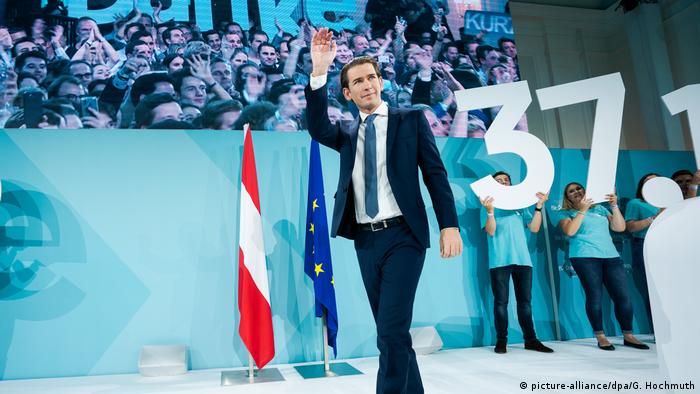 The far-right Freedom Party (FPÖ) suffered a worse-than-expected loss, down almost 10 percentage points to around 16%, a sign that the party's reputation may have suffered after a corruption scandal earlier this year.

The Greens gained 10.2 points to reach 14%, raising the prospect of a coalition between the ÖVP and the Greens.

Some 6.4 million Austrians were eligible to vote in Sunday's parliamentary election. 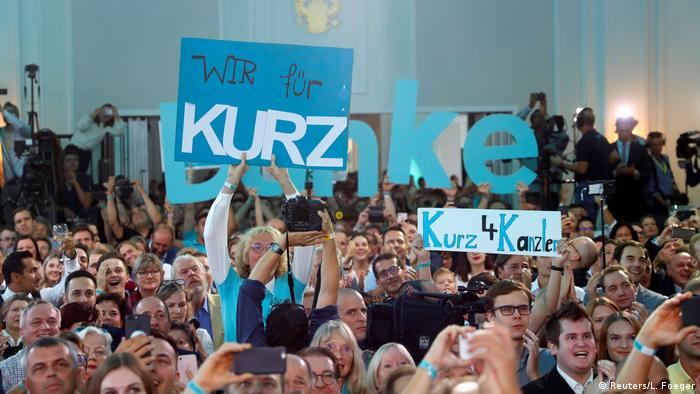 Supporters of the Austrian People's Party celebrated the poll projections

The vote followed the collapse in May of Kurz's coalition with FPÖ after a video sting scandal that forced the party's Vice Chancellor Heinz-Christian Strache to step down. The footage filmed secretly on the Spanish resort island of Ibiza showed Strache appearing to offer public contracts in exchange for campaign help from a fake Russian backer.

Kurz, 33, has emerged largely unscathed from the FPÖ scandal, even gaining voters from the FPÖ as its support has slipped to roughly a fifth of the electorate from just over a quarter in the last vote in 2017. On the left, there has been some shift in support from the Social Democrats (SPÖ) to the resurgent Greens.

"I fear coalition talks will be a little more challenging this time," Kurz said on Monday, referencing the relatively smooth talks with the FPÖ which followed the 2017 election.

The former chancellor indicated that he will take his time determining which party or parties with which the ÖVP would be prepared to enter coalition talks. "Of course we will seek talks with all parties and try to determine which parties there's overlap with, which parties a stable government can be formed with," the ÖVP leader said.

He also denounced calls from German commentators that he should avoid a fresh pact with the far right. "I don't think we need advice from abroad, including from Germany," he said. 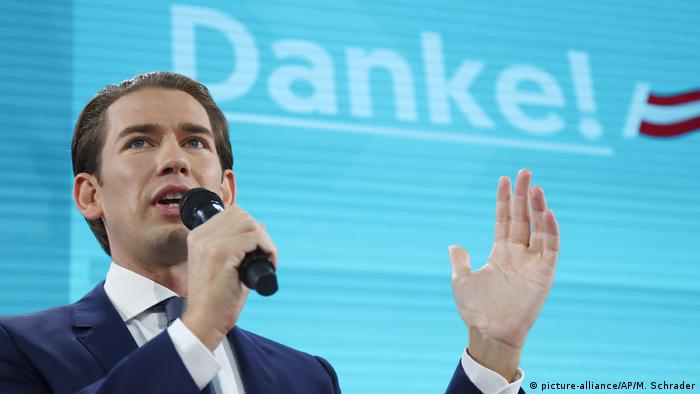 Sebastian Kurz talks to his supporters in Vienna

FPÖ's new leader, Norbert Hofer, said his party would prefer to sit on opposition benches. "A party needs to learn from the mistakes of the past and rebuild itself," he said.

The Social Democrats are among candidates as Kurz's possible junior partner. "It's not what we hoped for. It's not what we fought for," said SPÖ leader Pamela Rendi-Wagner.

A coalition between ÖVP and the pro-business Neos would also fail to command a majority as the latter received only 7.8% of the vote.

Werner Kogler, head of the Austrian Greens, acknowledged that his party had benefited from an increasing focus on fighting climate change, particularly among young voters. "We want to be able to look them in the eyes," he said when asked about the possibility of joining a future government.

Kogler said it was too early to talk about a possible coalition, but that the ÖVP would have to "change radically" on climate and poverty issues. "We might end up having no government" with Green participation if that does not happen, he said.

While immigration was the top voter concern during the previous election in 2017, surveys suggested that most of the voters were more concerned about climate change this time around.

Pre-election opinion polls showed that concerns over climate helped the Greens surge from less than 4% in the last election, when they crashed out of parliament.

Given the reason the election was called, corruption in public life and party financing were also prominent themes in the campaign, as well as more bread-and-butter issues such as social care.

As the campaign wound up last week, the FPÖ sought to focus voters' attention on its core issue of migration, railing against immigrants in general and Muslims in particular, rather than addressing recent scandals that have eroded its support.

Since World War II, Austria has been governed by either the ÖVP or the SPÖ. For 44 years in total the two ruled together, but it was Kurz who ended their last partnership, leading to the 2017 polls.

Anti-government protesters were jubilant when Austria's coalition with the far-right collapsed as a result of the Ibiza scandal. But ahead of Sunday's election, polls showed the fallout has had a limited impact. (29.09.2019)