Prosecutors have confirmed an investigation against the ex-leader of far-right FPÖ party, Heinz-Christian Strache, on suspicion of embezzling party funds. Strache was forced out of government over the "Ibiza" scandal. 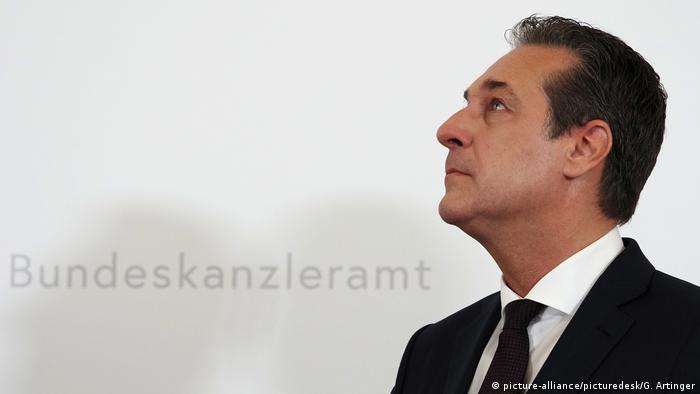 Authorities in Austria have launched a probe against far-right politician Heinz-Christian Strache over a suspected graft scheme involving him, his former bodyguard and the woman who worked as his one-time office manager.

Vienna prosecutors said the group was suspected of taking money from the far-right FPÖ during Strache's time as party leader. They reportedly handed in fake receipts to reimburse Strache's private expenses, amounting to over €5,000 ($5,460) over several years.

Officials said the procedure was still in the early stages, with evidence gathering still ongoing.

"In the course of the investigative measures conducted so far, a number of documents, especially invoices, have been secured," the prosecutors were quoted by Austrian daily Der Standard as saying.

No charges have been brought yet.

Strache rejected any wrongdoing and slammed "slanderers" and the media for "blindly" spreading the reports of corruption on Wednesday.

"These are all sleazy and made-up lies of a criminal network which has been working against me for years," he said in a Facebook post, published before prosecutors confirmed he was under investigation.

Strache's successor at the FPÖ's helm, Norbert Hofer, said the party would thoroughly investigate the issue. The party has pledged to check all invoices going back to 2013, according to the DPA news agency.

The news comes just three days before a snap election in Austria, which had been triggered by another scandal — known as Ibizagate — involving Strache four months ago. A video of the politician, who served as Austria's vice chancellor, showed him offering business deals to a woman posing as a niece of a Russian oligarch in a house in Ibiza, pledging favors in exchange for the woman's help in boosting the FPÖ news coverage.

Austria's parliament has taken advantage of a weak caretaker government to pass long-awaited reforms. However, not everyone is happy with the speed and the cost of these news measures. (05.07.2019)

An Austrian police tactical unit was deployed after a 57-year-old local politician fired indiscriminately from his balcony. No one was injured, and the populist Freedom Party of Austria suspended the unidentified man. (12.07.2019)