Austria has erected its border fence with Slovenia. The country has also rolled out a border management system that carefully screens passports and only allows refugees seeking asylum in Germany or Austria through. 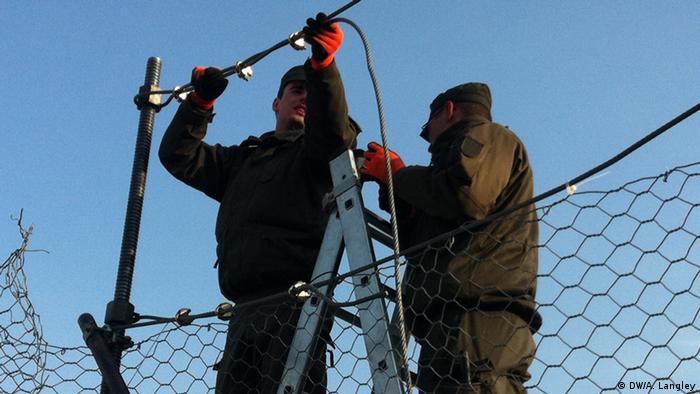 In the 1990s, Austria tore down its border fence with Slovenia. On Friday, soldiers put the finishing touches on a new one.

It is part of Austria's efforts to manage the large number of refugees who transit the country. Along with the fence, Austria is also perfecting a new border management system that will carefully screen passports and only allow refugees seeking asylum in Germany or Austria through.

"It's now running in a well-regulated, very orderly manner," said Manfred Komericky, deputy director of the police in the state of Styria.

Komericky stood in a 3.5-hectare (8.65-acre) area with seven enormous tents. Nearby, workers are constructing a new border police center; the disused Cold War-era ones were torn down.

Eventually, Komericky said, the area would be able to hold up to 4,000 people at a time and be the sole intake area for Austria. For now, it takes in about 500 people per day, most driven to the site from Slovenia's border with Croatia.

Fritz Grundnig, a spokesman for Styria, said Austria needed the new border center because Germany turns back up to 200 people per day. As Austria perfects its system, that number should go down.

The new management system isn't designed to deny shelter to refugees, though Austria has now officially capped the number of asylum applications it will approve at 37,500 this year - after the country took in 90,000 people in 2015. Only refugees who do not have papers or who do not seek asylum in Austria or Germany are sent back to Slovenia. Nearly all the migrants passing through are from Afghanistan, Syria and Iraq.

"Upper limits are a political decision," Komericky said. "It's our duty to make the border control more efficient." But, he added, "we hope we will be able to reduce the numbers, too." 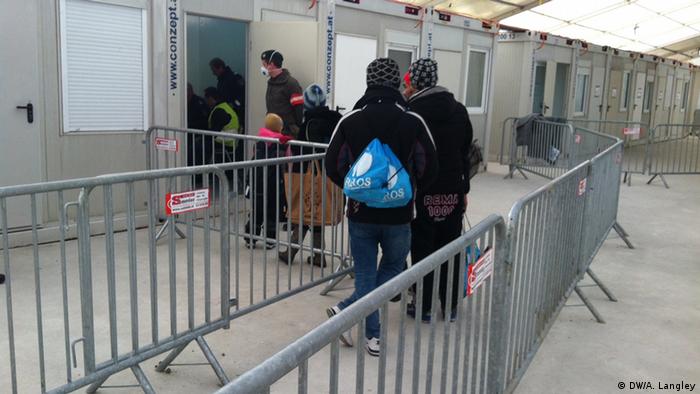 Early Friday morning, a group of Afghans were being escorted through. A girl wearing a bright pink jacket waited with her mother to show their passports. She smiled timidly at a young soldier who stood next to the makeshift office. He could not smile back: He wore a medical mask across his face.

Red Cross workers once were overwhelmed attempting to tend to the exhausted travelers. People reminisce about the time they helped a Syrian woman deliver a baby right on the border. Now, the workers relax in a well-heated tent, attending to the occasional flu. Food will be given to the refugees when they arrive at one of the intake centers. They will be able to shower there, too.

For now, Austria's new management system is an attempt to bring order to the country's border after a year in which people crossed various frontiers on foot by the thousands.

Each person first walks through a security screening, much like at an airport, only there are no metal detectors. All the checks are done by hand. Next, refugees queue at the 24 containers inside the largest tent for passport control. Each container houses work stations for two officials and one translater.

Passports are scrutinized for authenticity. Translaters also check to see if people's accents or dialects match the homeland listed on their papers. Only a small number of people are turned away for false papers or having no passport at all.

Twenty-six were sent back on Thursday. All of them had made the mistake of saying they hoped to go to a country other than Germany or Austria for asylum. However, a Slovenian reporter said, they crossed the border successfully later that day after changing their stated destinations. Komericky confirmed the pingpong migration. "Unfortunately, this, too, is happening."

In the three days that the system has been in place, only about 35 people have requested to remain in Austria. All the rest continue to Germany.

Once the weather improves, officials expect up to 5,000 people per day. The young soldiers who now are erecting the chainlink fence will remain in Spielfeld to assist the border police.

If all continues as it is, Austria will reach its stated upper limit of 37,500 refugees by May. When asked if they were prepared to deal with angry crowds, the soldiers said yes. They have all gone through crowd control training.

Komericky said he hoped it would not come to that.