Austria's conservatives and Greens have announced a deal to form a government after weeks of talks. Deemed an "experiment" by local press, it is the Greens' first foray into the Austrian government. 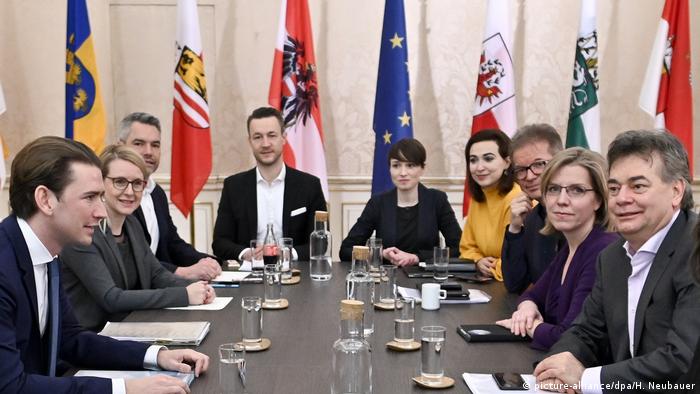 The "experiment," as the daily Kurier put it, will mark the first time the left-wing environmentalist Green party has been in government. The new coalition of widely disparate parties is likely to be significantly different from the previous government, which took a hard line on immigration.

"We have succeeded to unite the best of both worlds," said Kurz on Wednesday. "It is possible to protect the climate and borders."

Greens leader Werner Kogler said the two parties had managed to "build bridges" to form a government for "the future of Austria."

A coalition between the 33-year-old Kurz's ÖVP and the far-right Freedom Party (FPÖ) collapsed in May after 17 months amid a corruption scandal involving then-leader of the FPÖ and vice-chancellor Heinz-Christian Strache.

The so-called "Ibiza-gate" scandal — involving a video showing Strache offering favors to a fake Russian investor — triggered elections in September, in which disgruntled voters fled from the FPÖ and handed 37.5% of the votes to the ÖVP.

The Greens captured 13.9%, a record high for the environmentalists, as the environment and climate change replaced immigration as a top issue for voters.

According to Austrian media, the Greens will get a super Environment Ministry that also composes infrastructure, traffic, energy and technology. They will also control the Justice Ministry and Social Affairs Ministry. Greens chief Werner Kogler will become vice-chancellor. A Green party congress must approve the deal, but they are expected to do so on Saturday.

The ÖVP will hold all the other ministries, including those of Defense, Interior and Finance. Kurz will remain chancellor, making him the world's youngest leader.

Alexander Schallenberg, an independent politician, will remain as foreign minister.

Kurz described the deal as an "excellent result" for both parties.

Both parties are expected to try to balance compromises with maintaining key principles and campaign promises when they present the joint government program on Thursday. Kurz takes a tough line on immigration and is pro-business, while the Greens advocate multiculturalism and climate protection.

In Europe, Sweden, Finland, Lithuania and Luxemburg have Greens in government. The coalition in Austria will be closely watched in Germany, where the current coalition between the Social Democrats and Angela Merkel's conservatives is under strain.

In Germany, the Greens are polling at roughly 21% compared to the 8.9% the party scored in the last federal elections in 2017. A collapse of the current coalition government, early elections or the scheduled 2021 election could bring the Greens into government with Merkel's conservatives.

Heinz-Christian Strache charged his far-right FPÖ party up to €3,000 a month for playing online smartphone game Clash of Clans, according to reports. Strache lost his political posts in October over a corruption scandal. (23.12.2019)